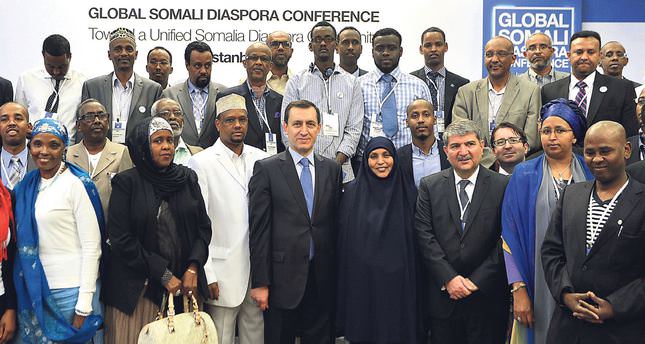 In a meeting organized in Istanbul, while Turkish officials commented on the importance of improving bilateral relations, Somalis expressed their satisfaction with Turkish presence in Somalia

Turkey's efforts to help Somalia, both through aid and infrastructure projects, draws praise from the members of the Somali diaspora, who gathered in Istanbul over the weekend at a conference hosted by Deputy PM Emrullah İşler. A Somali delegation delivered a letter of thanks to Prime Minister Erdoğan.

The Global Somali Diaspora conference was held on the weekend in Istanbul. The key figures of the Somali diaspora, Turkish Foreign Minister Ahmet Davutoğlu and Deputy Prime Minister Emrullah İşler attended the conference. Saying that Turkey's Somalia policy is based on three areas, İşler stated that "Turkey works for supplying stability and security in the country, supports the peace attempts in the Horn of Africa and struggles to convince regional and international actors to contribute to peace." There are 6 million Somalis living in the diaspora community due to civil war, draught and famine. İşler underlined the previous works of the diaspora as a brighter future for Somalia and added that "Somalis in the diaspora must preserve their culture and links with their country. They must increasingly continue their contributions to make solutions for the economic, political and social problems." In the evening the Somali diaspora delivered a letter to Prime Minister Recep Tayyip Erdoğan expressing their thanks and happiness with Turkish presence in the country.

In 2011 when the Somalian government made a call to the international community due to the drought that killed dozens of people, Turkey acted rapidly to deliver humanitarian aid. The Turkish Red Crescent (Kızılay) and the humanitarian aid foundations including Yardımeli and Humanitarian Relief Foundation (İHH) deployed their teams to deliver desperately needed essential humanitarian aid to the Somalis. Turkish Prime Minister Recep Tayyip Erdoğan paid a visit to the country with some members of the cabinet and his family.

Turkish Red Crescent officials are divided into two groups. While the first group delivers humanitarian aid across the country, the second group builds schools, roads and cleans the streets. Kızılay's Humanitarian Aid Delegation president said, "When we arrived here in 2011, we saw people dying of hunger in the streets. We have built accommodation centers for the internally displaced people (IDP) and started the delivery of the food such as biscuits and pasta as the people needed food so urgently. In the first visit we delivered 10,000 tons of food." "After the draught and famine were over, we continued our services. We deliver food to 12,950 people and 38 orphanage centers, four hospitals and six disabled centers every day. We make 11,600 loaves of breads every day in our mobile bakeries. In the accommodation centers we deliver food to 35,000 people. We deliver the aid to every district in the country. Due to security problems, Somalis work for Kızılay and we pay them," he said.

Noting that Kızılay's services are made by the donations of Turkish people, Ahi added that "Kızılay spent more than $30 million (TL 62 million) up to now for humanitarian aid alone. As long as Somalis need us, we will continue being here, building more hospitals, schools, wells and reach more people."

The other president of the Kızılay delegation Göksen Yenigül said, "We have two kinds of services in Mogadishu which are waste management and producing urbanization materials. From Turkey, we have brought big machines to clean and bury the trash and turn the areas into roads. We have made barriers in some areas to prevent floats. We have cleaned 86 km-long roads and the Turkish companies made them usable."

Yenigül remarked that Kızılay trains Somali people and teaches them how to work municipal facilities both technically and administratively as they plan to leave everything to the Mogadishu municipality before going back to Turkey.

Another Turkish NGO, IHH, has been delivering humanitarian aid to dozens of people. The NGO has established an orphanage center, hosting 350 children. Also, a farming school was established to teach students selected from villages to farm productively.

One of Turkey's official foundations, the Turkish Cooperation and Coordination Agency (TİKA) has been serving in the country since 2008. TİKA's Somalia branch Chairman Abdulahad Kökdağı said, "Turkey, before the humanitarian crisis, decided to renovate the Ottoman buildings, as Somalia has become part of the empire for many years. After the humanitarian crisis broke out, we decided to establish an office here to carry out services such as building hospitals, delivering computers to schools and organizing courses to train professions to the Somalis."
Last Update: Jun 22, 2014 7:00 pm
RELATED TOPICS