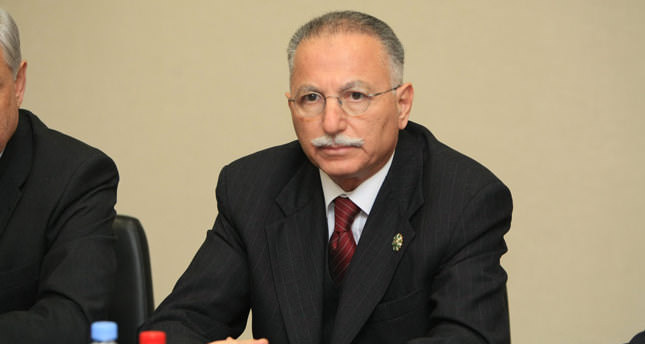 by Daily Sabah Jun 23, 2014 12:00 am
The joint presidential candidate of the opposition CHP and MHP, Ekmelleddin Ihsanoglu, responding to his secularist critics, denied he is against secularism or the Turkish Republic's founder Mustafa Kemal Atatürk.

Turkey's opposition parties announced former Organization of Islamic Cooperation (OIC) Secretary-General Ekmeleddin İhsanoğlu as a joint candidate, causing a rift in the country's political landscape. Disregarding all the criticism coming from the Republican People's Party (CHP) grassroots and voters, the opposition parties gave a start to İhsanoğlu's electoral campaign by using the media and official visits to certain actors in society.

Speaking to the Cumhuriyet daily, İhsanoğlu tried to defuse criticisms against himself that indicate he is against secularism and the founder of the Turkish Republic, Mustafa Kemal Atatürk.

İhsanoğlu denied these allegations in the interview by saying that he is at odds with Atatürk. He said, "Denying Atatürk means denying Turkish history." He added, "These evaluations make me sad. The people who carried made these evaluations - please check my past years. I held posts in Turkish Republic institutions; in particular, I had duties in Atatürk's institution."

He noted that Turkey should neither completely deny Atatürk nor sanctify him. He also responded to criticism regarding his Islamic background and allegations that he is not a secular figure. İhsanoğlu said that there should be limits between politics and religion.

Last week, a harsh reaction came from the Association of Republican Women. Members of the association, who supported the CHP, held a press conference in the western city of İzmir. The head of the association, Dr. Canan Arıtman, indicated the association's expectation from a CHP presidential candidate, saying that they expected a secular, democratic candidate who adopted the principles and reforms of the founder of the Turkish Republic, Atatürk, and who believed in the superiority of the law and the indivisible integrity of the country and nation. "He does not relate to the candidate profile desired by the Republic's women; that is why, we [the association] declared that we will not support İhsanoğlu and vote for him."

Describing İhsanoğlu as a religious figure who adopted Sunni political Islam as a lifestyle, Arıtman said that it is unacceptable that İhsanoğlu will be the probable president of a secular democratic Turkey. Arıtman also demanded the withdrawal of İhsanoğlu's candidacy in the press release.
RELATED TOPICS