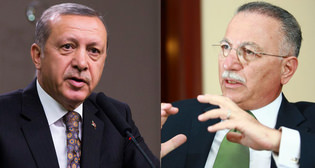 Objective Research Center (ORC), a renowned research institution has recently conducted a survey to analyze public opinion prior to the presidential elections which will be held in less than 50 days in Turkey.

While the Republican People's Party (CHP) and the Nationalist Movement Party (MHP) have come together and announced Ekmeleddin İhsanoğlu as their joint candidate, the AK Party is yet to announce its presidential candidate although many expect the current Prime Minister Recep Tayyip Erdoğan to run for president in the elections while the People's Democratic Party's candidate is expected to be Selahattin Demirtaş.

The survey was conducted in 32 provinces with the participation of 3026 people from June 18 to 21st. Findings suggested that Recep Tayyip Erdoğan received 54 per cent of the votes, while Ekmeleddin İhsanoğlu received 39,4 percent whereas HDP's candidate received 6,6 per cent. When Recep Tayyip Erdoğan's candidacy was replaced with Abdullah Gül, the latter received 52, 5 per cent while İhsanoğlu's votes increased to 40,5 per cent along with HDP which received 7,2 per cent in the case that Abdullah Gül runs for president but still did not surpass AK Party's votes.

On a different note, CHP supporters expressed disapproval of Ekmeleddin İhsanoğlu as the presidential candidate as 68 per cent stated they were not pleased with him whereas only 25 per cent of MHP supporters expressed they were unhappy with İhsanoğlu's candidacy. HDP's figures were also questionable as they consistently claim that they will attract a wider audience than its predecessor Peace and Democracy Party (BDP) but does not seem to have conveyed this message to a larger population in Turkey.