Stability serves the interests of Russia and the region 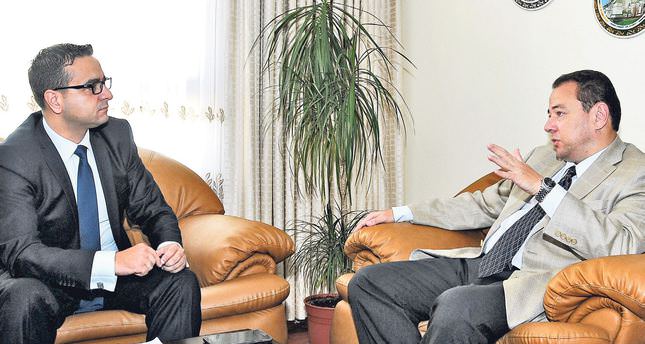 Those Crimean people who voted for integration with Russia will soon understand that it was a mistake and this decision will harm Tatar presence, says Ukrainian envoy Sergiy Korsunsky

Presidential elections that were held in Ukraine at the end of May have raised hope for the restoration of stability in the country. However, social and political fragility continues, especially in Russian-influenced eastern Ukraine. On top of that, Crimea's annexation to Russia keeps the issue alive and continues to escalate the political tension between Russia and Ukraine. Ukrainian Ambassador Sergiy Korsunsky evaluates the post-election period, the Crimean issue and the latest developments in Ukraine in a Daily Sabah exclusive interview.

The recent election is one of the most important events in Ukraine's immediate past. Ukrainian businessman Petro Poroshenko gained a landslide victory, and his government has started to work for the country's stability in an extremely difficult political environment. However, what are the main reasons that make the election so important? On the election process atmosphere, Ukrainian Ambassador Korsunsky pointed out the need for political legitimacy in the country. "After the events between November and February, the continuation and legitimacy of the government became a top priority. We have had a legitimate parliament, but taking into account the constant accusation from the Russians that the Ukrainian government is not a legitimate one, it was decided that first we have to put an end to this accusation. Therefore, we elected the new president in fair elections that were monitored by as many observers as possible from every country that wanted to participate."

The Ukrainian ambassador also stated that just holding presidential elections would not be sufficient to meet the demands of the people. "We need the whole system of power to be re-launched, reinstalled with new faces and new people because this is the same parliament in which - at that time - the majority was attributed to the former president's party.

They voted for banning some civil rights, which makes people very unhappy. Having an arithmetical majority on the side of the president is not enough; we think that we are in need of new members of parliament. We sincerely believe that it will bring stability to all branches of government, and very soon we will see positive developments in our fight against terrorism as well."

When asked about the reaction of the newly elected government's attitude toward eastern Ukraine and "terrorist activities" in the region, Mr. Korsunsky replied confidently and emphasized the new presidents' resoluteness to put an end to instability in Eastern Ukraine: "President Poroshenko has created a proposal about how to end this. He put forward a comprehensive peace plan. First, he said that those insurgents who did not personally participate in acts of violence or the killing of our soldiers and civilians in eastern Ukraine and who are under the influence of Russian propaganda, if they put down their arms, they are not going to be persecuted. We guarantee foreign fighters and mercenaries that they may leave our territory. However, those terrorists who continue to fight - they will just be erased; we cannot communicate with them."

Furthermore, Ambassador Korsunsky claims that bringing stability to eastern Ukraine requires Russia's good intentions, and he also believes that this circumstance is not in the interests of both sides. The ambassador also pointed out that the Russians should stop supplying and training these people. "We have intercepted their communications with Moscow and Russian officials who manage all these terrorist groups. We know that they are receiving payments from the territory of Russia, not necessarily from the official Russian budget; even our former officials, including Yanukovych, have billions in cash, and therefore they finance those terrorists. Those terrorists receive like $350 per day, and they receive premium payment for each soldier they kill, each official they kill, each helicopter they shoot down and each tank they burn."

Regarding a question about the circumstances in Crimea and the Crimean Tatars, Korsunsky noted that Ukraine sees Crimea as its integral part and shared with us his concern about the Crimean Tatars under the governance of Russia. Korsunsky also remarked that they would appeal to any international court about Moscow's outrageous acts in Crimea. "We are not going to accept this annexation.

It is hard to believe the Russians are going to withdraw from the Crimea themselves, but there are several legal and diplomatic mechanisms that could be put forth. First of all, we are going to sue the Russian federation in different courts. We already have a few cases in the International Court of Human Rights because the human rights of the Crimean Tatars and Ukrainians are being violated. Now, we have been preparing for the International Court of Justice because we lost approximately $100 billion in territory and factories, and therefore, we want the Russians to pay compensation," the Ukrainian ambassador said.

Mr. Korsunsky also stated that Crimea was naturally a part of Ukraine because of geography, infrastructure and so forth. He also argued that sooner or later those Crimean people who voted for integration with Russia would be regretful. "The will to stay in Russia will disappear very soon because Crimea economically and geographically is not feasible with Russia's capabilities. Why did Khrushchev ask Ukraine to take Crimea into Ukraine years ago? We did not occupy Crimea, we were asked to take Crimea as part of Soviet Ukraine within the Soviet Union because Crimea had been destroyed after World War II, and there was no electricity, no water and no infrastructure. Then they asked us to take it and build it, and we did.
Therefore, we believe that this desire will be gone, and people will understand what a mistake they have made."

Commenting on the relationship between our two countries, Mr. Korsunsky said that since the beginning of this crisis Turkey had been very supportive of the integrity and sovereignty of Ukraine. "We appreciate the Turkish Foreign Ministry's efforts, including nearly 15 statements on different occasions concerning Ukraine.

The Turkish side has always helped us in every international forum like the U.N. General Assembly or the U.N. Security Council, the Council of Europe, NATO, the OSCE, et cetera."

Turkish-Ukrainian relations gained momentum in recent years, and after the establishment of the High-Level Strategic Council, both countries elevated relations to the level of strategic partnership. Mr. Korsunsky said that the new Ukrainian administration is also willing to continue good relations. "Both sides were very positive on the issue of continuing the work of the Strategic Council and developing strategic relations. We have very important bilateral projects in the fields of transportation, aerospace, etc., and we have already completed a visa liberalization process.
We should strengthen these relations with a free trade agreement."