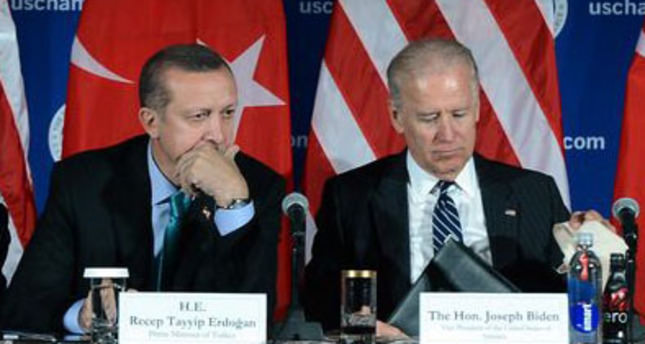 by AA Jun 24, 2014 12:00 am
Turkish Prime Minister Recep Tayyip Erdoğan and U.S. Vice President Joe Biden agreed on the necessity of the formation of a unity government in Iraq in a phone conversation Monday.

Erdoğan and Biden exchanged views on the latest developments in Iraq, and agreed on the prompt formation of a national consensus government in order to protect Iraq's territorial integrity and political union, and to achieve success in its fight against terror, Turkish officials said.

Concerned over Iraq being drawn into a sectarian conflict, Erdoğan and Biden underscored that the national consensus government should embrace all Iraqi citizens, and give Sunni Muslims a chance to be represented again.

They also discussed the ongoing efforts to ensure the safe return of the Turkish nationals seized in the restive country, said Turkish Prime Minister's office.

Militants affiliated with the Islamic State of Iraq and the Levant, or ISIL, abducted 49 people from the Turkish consulate in the flashpoint city of Mosul on June 11, one day after seizing 31 Turkish lorry drivers.

Iraq has seen a marked increase in sectarian violence between Sunni and Shi'a Muslims in recent months, which the Iraqi government blames on ISIL.

ISIL, which already controls parts of Syria, has extended its reach into Iraq since June 10 when it seized Iraq's second-largest city Mosul and have captured a number of other cities in the north including Tikrit and Tal Afar. They also reportedly control Al Qaim, Rawah, Anah, Al Ratba and Haditha in the western province of Al Anbar.

ISIL forces also extended their grip along Iraq's Syrian and Jordanian border on Monday after taking control of border crossings, according to Farhan Ftikhan, the mayor of Al Qaim.

Around one million civilians have been displaced so far amid the ongoing clashes in the country.