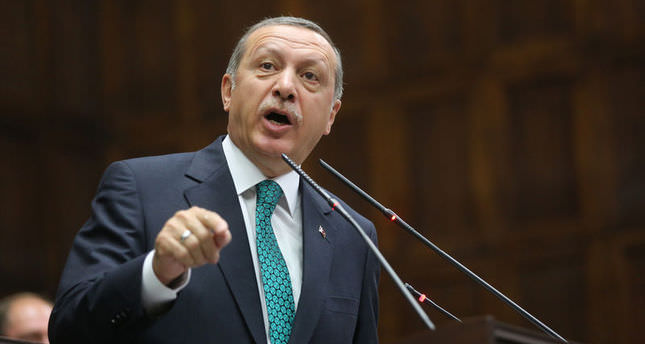 by Daily Sabah Jun 24, 2014 12:00 am
Prime Minister Recep Tayyip Erdoğan on Tuesday has met with Ambassadors from the European Union and made important remarks on numerous subjects including the current crises in Syria and Iraq, the refugee crisis, military takeover in Egypt along with local issues.

Explaining the workings of the Gülen Movement which is led by Fethullah Gülen who may be facing extradition charges for plotting against the Turkish government, Erdoğan claimed they have infiltrated into each and every single level of state institutions and have established dominance over the judiciary, conducting numerous unlawful operations while claiming that Turkey cooperates with and supports terrorist organizations like Al-Qaeda and the state of Iran, which is a contradictory claim considering the fact that both have opposing ideologies . Accordingly, he informed EU states they should be aware of the fact that Turkey does not support any terrorist organizations and fights against them. He noted that fighting against terrorism was one of the main subjects of Turkey's EU agenda.

Erdoğan criticized Western states for not calling the Egyptian military takeover a coup and stated the government will not congratulate General al-Sissi for winning the elections because he clearly did not gain power through free and fair elections.

On the other hand, he noted the only way to resolve the conflict in Iraq would be through a coalition government while he blamed Maliki for his divisive policies. With regards to the abduction of 81 Turkish citizens in Mosul by militants from the Islamic State of Iraq and Sham, Erdoğan stated they are in touch with Western powers and hope to bring the hostages back home safely. Likewise, in response to the Syrian refugee crisis Erdoğan expressed the situation requires intensive global cooperation as extremism in Syria is on a rise and is a serious issue of concern for everyone. The prime minister noted foreign militants used Turkey as a transit door to Syria, posing an imminent threat to Turkey's security and expressed the government is working hard to block the transfer of such third-party militants to Syria from Turkey as they have issued an exclusion order for 5,300 people.

Erdoğan expressed his hopes about the new presidential system in Turkey and stated he believes that the new system will reinforce stability and confidence in the country. "A new era will begin starting in September" said Erdoğan, who noted the new era will enable reforms to be implemented in a faster and more determined manner.