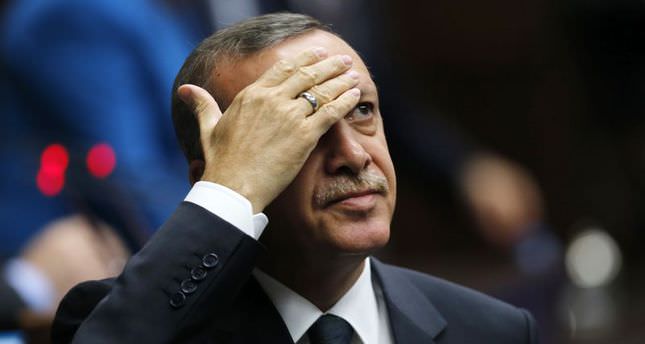 by Daily Sabah Jun 24, 2014 12:00 am
Turkey's ruling AK Party will announce its presidential candidate at a parliamentary group meeting on July 1, PM Erdoğan said on Tuesday.

Speaking at AK Party's Group Meeting on Tuesday Prime Minister Recep Tayyip Erdoğan expressed being a citizen of the Republic of Turkey is the sole criteria for the government as they put equal value to all faith systems, sects and ethnic backgrounds.

Touching upon the importance of the government to show respect for all citizens regardless of their backgrounds, Erdoğan stated differences are an indicator of richness, not conflict and that the government embraces everyone. He explained that people were forced to accord with certain standards in the Old Turkey as people were oppressed for their differences for decades whereas now the government is removing all obstacles on the way of different faith groups as they are returning the properties of non-Muslim pious foundations in Turkey. "The country was not weakened nor was it divided as the old regime claimed" Erdoğan said, who remarked the fears were self-produced to steer people into a certain mindset.
On the other hand, Erdoğan expressed he would sue Devlet Bahçeli, the leader of the Nationalist Movement Party for insulting him and casting aspersions on Erdoğan and his family about corruption.

On the other hand, Erdoğan expressed he would sue Devlet Bahçeli, the leader of the Nationalist Movement Party for insulting him and casting aspersions on Erdoğan and his family about corruption while he expressed Bahçeli is not capable of becoming a leader which was proven by his experience as the deputy prime minister. "You cannot even be an apprentice in politics" Erdoğan exclaimed to Bahçeli and continued by addressing the supporters of MHP as he expressed Bahçeli cannot bring them anywhere as by nature he is naturally unfit for politics.

Erdoğan also touched upon the position of the president as he expressed it will no longer be a symbolic one and he stated the president will be someone who will combine the authority given by the constitution with the authority given by the people. "Up until today, the notion of the president was that he represented the government who represented the people" said Erdoğan, who noted they will remove this gap and the popularly elected government will rule along with the popularly elected president, signifying in a way an embracement of the people by all levels of the state.