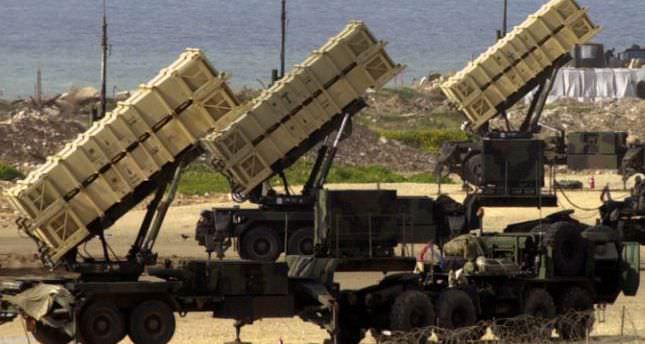 by AA Jun 25, 2014 12:00 am
Germany's Defense Ministry Deputy Spokesman Ingo Gerhartz dismissed media reports over claims that Patriot Missile Batteries in Turkey would be withdrawn at the end of 2014, adding that the mission could be extended for two more years.

Germany has announced it is prepared to extend its deployment of Patriot missile batteries in Turkey if Ankara requires it. The announcement on Monday came one day after the German press reported that NATO allies had begun talks on halting the mission - which Ankara had requested in 2012 amid possible threats from Syria - at the end of 2014, following the removal of chemical weapons from its southern neighbor.

Ingo Gerhartz, the deputy spokesman of the German Defense Ministry, said, "If they would need us and if there would be a demand, we can extend the mission for another two years." He rejected reports in the German weekly Der Spiegel which claimed German moves to end the mission had been influenced by difficulties faced in rotating military staff deployed in Patriot units, as the German army lacked specialist personnel. "It is not actually true," Gerhartz told journalists, stressing that large NATO deployments were always prepared to be extended for two years. "At the end of this year, the mission will complete its second year. In terms of personnel, we are prepared to continue it for another two," he stressed.

German Defense Ministry Deputy Spokesman Gerhartz confirmed that NATO had conducted a review of its Patriot mission in Turkey late last month, but said such three-month reviews of deployments were routine. "In this review, it was concluded that the threat level had been decreased with the destruction of Syria's chemical weapons but, on the other hand, the rest of the risks remained unchanged," Gerhartz said. He stressed that Germany saw the Patriot deployment as a very successful operation and an example of solidarity among NATO allies. "We have said it very clearly. If they would need us, and if there would be a demand, we can extend the mission for another two years," Gerhartz said.

The German parliament decided in late January to extend its deployment of Patriot missiles in Turkey until Jan. 31 2015, with the possibility of a further extension. The batteries have been stationed in Kahramanmaras since January 2013 and have been operating under the command and control of NATO.

The mission involves up to 400 troops from the German military. The costs of the deployment, estimated to be around 25 million euros (TL 72.5 million) per year, are covered by Germany. The U.S. and the Netherlands also operate two Patriot missile batteries each as part of the NATO mission.