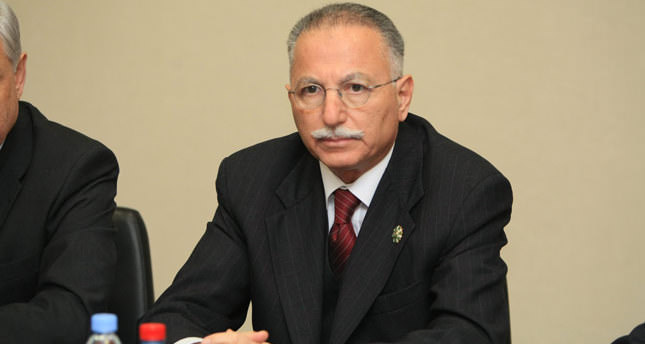 by Nurbanu Kızıl Jun 26, 2014 12:00 am
The nomination of Ekmeleddin İhsanoğlu as the joint presidential candidate of the Republican People's Party (CHP) and Nationalist Movement Party (MHP) continues to receive criticism as Turkey's Alevi associations and federations express their disapproval of the candidate for failing to meet the ideals of Alevi citizens, while most Alevi representatives indicate they will not support İhsanoğlu in his presidential bid.

Lawyer Ali İhsan Şahin, the president of the Universal Alevi Bektaşi Association, has told Daily Sabah that they were shocked and found it strange for the CHP and MHP to nominate İhsanoğlu as their presidential candidate. "I did not quite understand why the CHP came up with such a candidate," remarked Şahin, who said he has full insight into the CHP's philosophy, has followed the expectations of its supporters and did not expect for someone like İhsanoğlu to be nominated by the CHP, which is a secular party, whereas he claimed İhsanoğlu has conservative tendencies and has many features that resemble Prime Minister Recep Tayyip Erdoğan.

Şahin observed that the two main opposition parties did not create an alternative to the Justice and Development Party's (AK Party) candidate, which will most likely be Erdoğan, but rather came up with someone who is almost similar to the prime minister. "They should have just said there is no better alternative to Prime Minister Erdoğan," said Şahin, who indicated that regardless of how much Kemal Kılıçdaroğlu, the leader of the CHP criticizes Erdoğan, it seems that he secretly admires him. On the other hand, he said that neither the CHP nor MHP asked for their insight into who the joint candidate should be, as they do not fit the CHP's ideals, and there is a distance between the Universal Alevi Bektaşi Association and the CHP. Şahin said the ideal president for Alevis would be determined through discussions with Alevi dedes and underlined that they would not vote for İhsanoğlu. "The president should be someone who has served Alevis with his/ her actions and words in the past," said Şahin, who claimed İhsanoğlu has no involvement or relevance to Alevis, whereas they expect someone who has taken steps regardless of how small they are and someone who has worked for Alevis' legal and constitutional rights to gain equal status. "We expect the presidential candidates to take into consideration the needs of 25 million Alevis and want them to explicitly outline their projects for Alevis when they become president," said Şahin, noting that they, like other Alevi associations and federations, will be closely watching the process.

Fevzi Gümüş, the chairman of the Alevi-Bektaşi Federation, has indicated they met with Kılıçdaroğlu prior to the announcement of their candidate and conveyed their views about the candidate, which he responded to by saying that he would take them into consideration. "But he announced İhsanoğlu as the candidate two days later," said Gümüş, who stated İhsanoğlu served as an advisor to Alparslan Türkeş, the former MHP leader, and has Islamist tendencies. "İhsanoğlu does not respond to societal expectations and cannot be a candidate for the Alevis," Gümüş noted.

Likewise, Müslüm Doğan, who is the chairman of the Pir Sultan Abdal Cultural Association, has indicated İhsanoğlu was not a suitable candidate for Alevis and noted Alevis would not vote for someone nominated by the MHP. On the other hand, Cengiz Hortoğlu, the president of the Anadolu Alevi Bektaşi Federation, said that as Alevis they want someone who will respond to the needs of everyone in society and did not know if İhsanoğlu fit this criterion. He said that they would closely follow the campaigns of all candidates in the next 40 days and vote for the one who will respond to their needs. Hakkı Engin, spokesperson for the Federation of Alevi Associations, also told Daily Sabah that the Alevi Federations will meet and discuss the matter, but the candidacy process in Turkey currently does not work as they wish. He stated Alevis would want someone who will embrace everyone regardless of their ethnic or religious backgrounds.

While the debate continues, the government said they will respond to the needs of all citizens as Erdoğan consistently highlights the fact that for almost a century there was a false perception in Turkey that if people were different, this would "divide and break the country into pieces," but he said the current government has lifted such obstacles and allowed differences to flourish, which did not divide the country but has actually strengthened it, and they will continue to take all measures to address the current issues faced by Turkey's minorities.
Last Update: Jun 26, 2014 6:02 pm
RELATED TOPICS