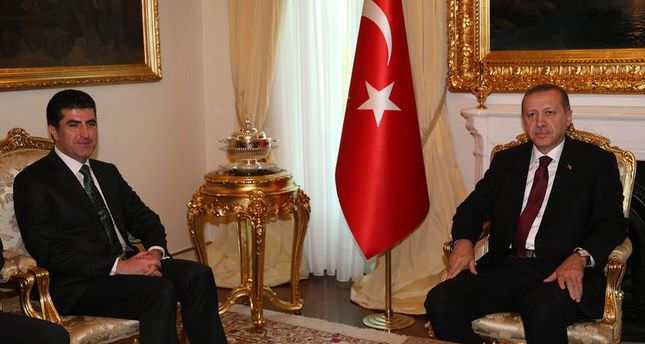 by Daily Sabah Jun 26, 2014 12:00 am
Prime Minister Recep Tayyip Erdoğan on Thursday has accepted Nechirvan Idris Barzani, the Prime Minister of the Kurdistan Regional Government of Iraq and held a meeting with the participation of Ahmet Davutoğlu, Turkey's Minister of Foreign Affairs; Taner Yıldız, the Minister of Energy and Natural Resources; Hakan Fidan, the Secretary General of the National Intelligence Organization (MİT) along with other political figures from both sides.

According to prime ministerial sources the main agenda of the meeting consisted of the crisis in Mosul and Kirkuk and the region. Emphasizing the idea that instability and security issues in the region are a main cause of concern, Erdoğan stated it was crucial to overcome the crisis and establish an inclusive administration in Iraq which will allow all sects and ethnicities to be represented in a fair manner.

Underlining the fact that it was necessary to immediately establish a government through consensus, Erdoğan noted Iraq's territorial integrity was crucial and any sort of sectarian based conflict should immediately be resolved.

Both Erdoğan and Barzani expressed Turkey and Iraq continue to cooperate in the field of energy and added it would be beneficial to further strengthen the cooperation initiatives.

Nechirvan Idris Barzani has also met with Ahmet Davutoğlu and he went to Kirkük after the meeting to meet with representatives of political parties in the city.