Turkey not to be dragged into fight, says PM 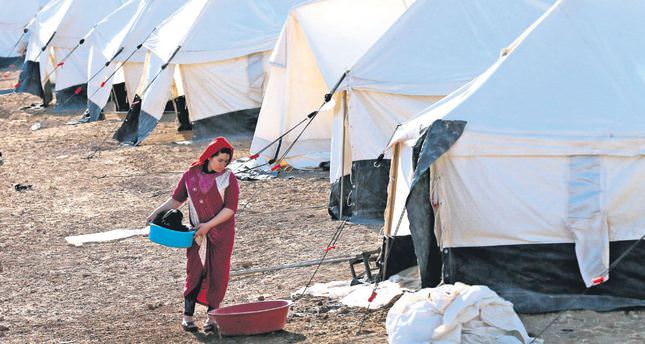 by Daily Sabah Jun 26, 2014 12:00 am
IraqI Turkmens who are under attack from the Islamic State of Iraq and al-Sham (ISIS) have Turkey's full support, said Prime Minister Erdoğan, adding that the government was doing everything it could to free its abducted citizens. Erdoğan also said Turkey could not remain idle while
people were dying across the region.

Turkish Prime Minister Erdoğan yesterday reiterated Turkey's support for Iraqi Turkmens who are under threat from ISIS and accused opposition parties of aiming to undermine the government's effort to rescue Turkish citizens abducted by ISIS in Mosul Prime Minister Erdoğan yesterday said that Turkey has always taken a stand against sectarian conflict and will continue to do so.

Speaking at the AK Party Extensive Provincial Chairmen's Meeting, Erdoğan condemned sectarian clashes and said that Turkey has always had a positive stance in the region and treats all parts of society equally regardless of sect.

Regarding Iraqi Turkmens who are facing assaults by the Islamic State of Iraq and al-Sham (ISIS), Erdoğan said that Turkey is soing its best to help Turkmens in the region with an effort that has never been seen before in the Turkish Republic's history.

Stressing that Turkey will not remain an onlooker concerning regional issues in Iraq and Syria, Erdoğan said that Turkey cannot remain idle while there are people dying in Egypt, Iraq and Syria. He stated that the Turkish government is following the situation closely and will condemn those looking to destabilize the region.

Touching on deliveries of humanitarian aid to Iraqi Turkmens, Erdoğan said that as part of the Turkish Presidency of Disaster and Emergency (AFAD) program, Turkey delivered food rations for 40,757 people, tents for 12,500 people and medicines for 218,000 people in the region. Erdoğan said that the Turkish Red Crescent, AFAD and Turkish Cooperation and Coordination Agency (TİKA) delivered needed humanitarian aid Iraqi Turkmens in need.

On the subject of Turkish citizens abducted in Iraq, Erdoğan stated that Turkey is in contact with international platforms to enable the release of abducted citizens and the country holds its readiness against every possible scenario and added that Turkey does not want to jeopardize abducted citizens. He said that Turkey has been in contact with the Kurdistan Regional Government (KRG), the U.N., NATO, the U.S., the U.K., and with the UAE for Turkish people abducted in Mosul. "We [Turkey] always stand with nations who suffered from the recent clashes in the Middle East and tension in northern Africa. We always take the side of peace and those who are in need. We will let no one drag us into the middle of this fight. We are a different country. I want the Turkish nation to know that Turkey is the only country that has a deep-rooted state tradition and experience."

Slamming the Republican People's Party (CHP) and Nationalist Movement Party (MHP), the prime minister said that opposition parties are carrying out a policy which could put abducted citizens at risk. Erdoğan denounced the CHP and MHP, saying, "They never take responsibility for the nation in the country's history. Their approaches to the abduction issue pose a threat to our citizens [abducted in Mosul]."

He further asserted that media outlets close to the opposition parties put pressure on the government to take a provocative discourse against ISIS and wait for any governmental move that will add a flame to the conflict caused by ISIS. Erdoğan stated that Turkey has enjoyed peace for years and that is why the country will not let unrest in the Middle East spread to Turkey. The prime minister reiterated that Turkey has its own agenda and it makes effort to improve the country's future.
Last Update: Jun 26, 2014 1:21 am
RELATED TOPICS