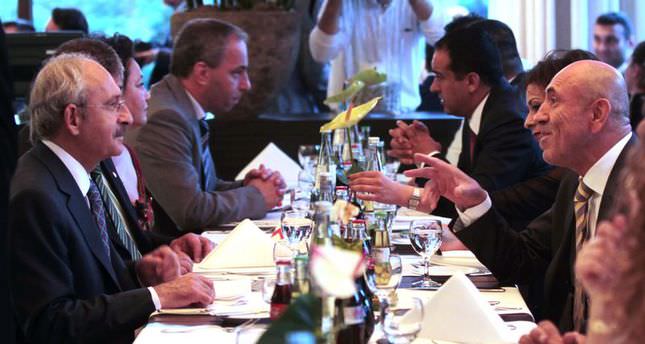 by Daily Sabah Jun 27, 2014 12:00 am
Kemal Kılıçdaroğlu, the leader of Turkey's main opposition, the Republican People's Party (CHP) on Thursday went to Cologne, Germany yesterday to promote Ekmeleddin İhsanoğlu as the joint presidential candidate of CHP and the Nationalist Movement Party (MHP).

Responding to the questions of the press, Kılıçdaroğlu stated he was in Germany to meet with different members of Turkish society and convey their thoughts on the presidential election process while answering their questions about Ekmeleddin İhsanoğlu. "We want our citizens to take this into consideration" said Kılıçdaroğlu, who called people to notice that they are not seeking a chairman for a party but were trying to find someone who will represent Turkey as a whole. "The president will be everyone's president" he noted, adding that the president should assure peace in society and claimed İhsanoğlu had this characteristic. He expressed İhsanoğlu has contributed greatly to the Turkish society and is committed to the constitution, secularism, the republic, democracy, justice and people's values. He claimed İhsanoğlu synthesizes the East and West and has a global reputation for his efforts in improving human rights.

"We will achieve peace in Turkey if such person is elected as the president" Kılıçdaroğlu expressed, claiming that İhsanoğlu opposes conflict and is someone who embraces everyone in the society.

The opposition leader will meet with leader of different religious communities of Turkey in Germany including Assyrian Orthodox, Armenian Orthodox, the Turkish Islamic Unity Mosque of the Directorate of Religious Affairs and the German Alevi Federation. Unlike Recep Tayyip Erdoğan who chose to address thousands of Turkish citizens living in Europe, Kılıçdaroğlu limited his campaign visit to meetings with businessmen and leader of different communities.

İhsanoğlu has received wide range criticism from within the CHP and various Alevi organizations which claimed he does not represent them and expressed they would not vote for İhsanoğlu. Public opinion polls also indicate İhsanoğlu may not get CHP and MHP the votes they aim to gain in the upcoming presidential elections in less than 40 days.