Benevolence a key aspect of the spirit of Ramadan, says Erdoğan 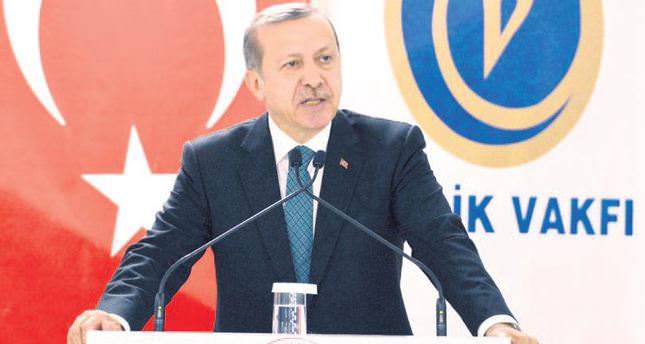 Reflecting on the tragedies that befell the Muslim world in the past year, the PM said Ramadan is a time when people need to help those less fortunate

Prime Minister Recep Tayyip Erdoğan attended an iftar dinner organized by Birlik Vakfı, a charitable foundation, on Saturday and conveyed numerous Ramadan messages and expressed his hopes of achieving permanent peace in the region. Stating that this year's Ramadan comes at an extremely difficult time for Muslims throughout the world, Erdoğan stated they welcome Ramadan with hope, excitement and expectations regardless of the region's crises. He said Muslims should be self-reflective when fasting and empathize with the poor, the needy and the oppressed,
rather than solely starving one's self.

"Fasting is about questioning one's life and realizing the real purpose of life as this world is only temporary" Erdoğan told the audience.

On the other hand, he touched upon the situation in Iraq and Syria and stated nobody should blame foreign powers for the current situation as Muslims should question themselves for fighting amongst each other. "There are a number of poor souls who under the name of Islam bomb mosques where people are praying" said Erdoğan, who greatly criticized the exploitation of religion for ideological means as Islam is a religion of peace and prohibits such violent actions. "Those who fail to ask the most basic questions to themselves are the ones who unfortunately legitimize killing and shedding blood" Erdoğan noted, who explained Muslims in Egypt, Syria, Iraq, Libya, Afghanistan, Somalia and throughout the world look up to Turkey as a hope and this puts a serious responsibility on Turkey's shoulders, as Turkey should walk towards a better future with determination and courage.

Referring to the Directorate of Religious Affairs' Ramadan campaign called "Let nobody be without anybody", Erdoğan called everyone to generously give charity during the holy month as he claimed it was in the spirit of Ramadan to help the needy.

Likewise, the prime minister prayed for an end to the oppression in Egypt, killings in Syria and Iraq and prayed that people can live peacefully in Libya, Myanmar and wherever there is oppression.
RELATED TOPICS