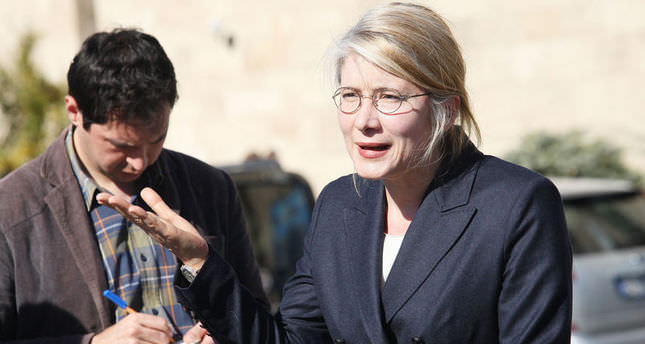 by Daily Sabah Jul 01, 2014 12:00 am
Internal conflict within the Republican People's Party (CHP) is multiplying as a group of dissenting deputies attempt to collect signatures in efforts to nominate a different candidate for the upcoming presidential elections rather than CHP and the Nationalist Movement Party's (MHP) joint candidate Ekmeleddin İhsanoğlu.

While 21 dissidents from the neo-nationalist wing of CHP have previously refused to approve İhsanoğlu's nomination, Eskişehir Deputy Süheyl Batum's nomination of Emine Ülker Tarhan has also failed, as he could not get twenty signatures required to nominate her. The dissenting deputies including Dilek Akagün Yılmaz, Nur Serter, Emine Ülker Tarhan, Birgül Ayman Güler, Süheyl Batum, İsa Gök and Ali Haydar Öner gathered at the Turkish Grand National Assembly on Monday to evaluate the situation as they are expected to announce a mutual declaration on Wednesday. Accordingly, their efforts are criticized by the party administration as Engin Altay, the Group Deputy Chairman of CHP has warned them about utilizing the mechanism of party discipline, which they would not desire.

According to party sources, only a few people want the nomination of Emine Ülker Tarhan as the president while others oppose it, evident by the fact that they have failed to collect twenty signatures. For instance, Kayseri Deputy Şevki Kulkoğlu on his Twitter account has expressed he will not vote for İhsanoğlu for a number of valid reasons and noted he does not think Tarhan is an appropriate candidate for CHP. On the other hand, Tunceli Deputy Hüseyin Aygün has also expressed he does not approve the nomination of a second candidate from CHP because this would benefit Recep Tayyip Erdoğan who will be running as president. Likewise, Faruk Loğoğlu, the Party's Vice President stated the nomination of a second candidate was "against the party spirit and party discipline". Engin Altay, CHP's Group Deputy Chairman stated it was normal for deputies to not support and sign İhsanoğlu's nomination as it was their personal choice but he expressed it was unacceptable and wrong for them to harshly criticize the party's choices. "The party regulations explicitly state how party discipline works" said Altay, who criticized dissenting deputies for acting as if they were members of another party, a move not welcomed by the party base.

Meanwhile, Tarhan has expressed she is encouraged by the suggestion and stated they continue to work towards coming to a conclusion but the division is more likely to divide CHP's votes, which according to many polling companies is not likely to exceed 35 percent.