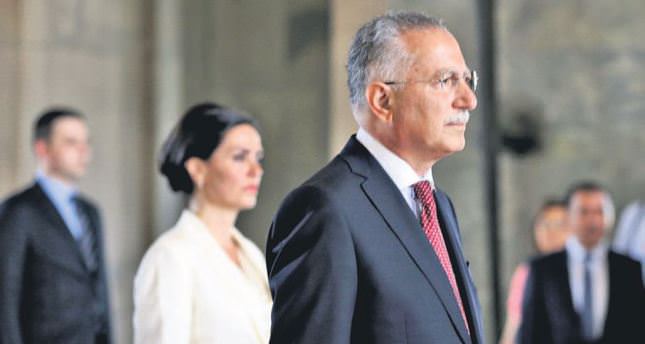 by Daily Sabah Jul 01, 2014 12:00 am
In a bid to defuse criticism, the joint presidential candidate for the secularist Republican People's Party (CHP) and the Nationalist Movement Party (MHP), Ekmelleddin İhsanoğlu yesterday visited the tomb of Mustafa Kemal Atatürk who transformed Turkey through secularizing and westernizing reforms. Turkey's main opposition parties two weeks ago announced the former secretary general of the Organization of Islamic Cooperation (OIC) İhsanoğlu as their joint candidate.

He is considered an inclusive candidate by the opposition. Yet İhsanoğlu's candidacy faced heavy criticism from the CHP's secularist members and stirred up intraparty conflict that followed the party's failure in the March 30 local elections.

CHP deputy Emine Ülker Tarhan stood against İhsanoğlu's candidacy and harshly criticized the CHP administration's stance opposing İhsanoğlu.
Through her Twitter account, Tarhan said that this joint candidate choice is such a big mistake that she cannot even describe it by calling it a "mistake" only.

Despite the ongoing debates as to whether Tarhan will be candidate, allegedly she refused to be nominated by the secularists. Ekmeleddin İhsanoğlu is a Turkish academic, diplomat and former secretarygeneral of the Organization of Islamic Cooperation (OIC). His family went to Egypt as a reaction to Mustafa Kemal Atatürk's attempts to transform and secularize Turkish society through abolishing traditional Islamic institutions and establishing an oppressive regime against Islam. Born in Egypt in 1943, İhsanoğlu has worked on science history, Turkish culture, Islamic world, Western relations and Turk-Arab relations. He studied science at the Ain Shams University, where he received his BSc in 1966. He remained in Cairo and obtained his MSc in 1970 from Al-Azhar University. İhsanoğlu received his PhD from the Faculty of Science at the Ankara University in 1974.

Taking the office as secretary-general of the OIC in 2005, İhsanoğlu, elected by voting, is marked as the first Turkish secretary-general. During his duty in OIC, he was harshly criticized by several groups and the government for his silence against the military coup in Egypt held on July 3 and against the war crimes committed by the Assad regime in Syria.

İhsanoğlu's perspective that differs from the Turkish government's caused a rift between senior governmental figures, including Turkish Prime Minister Recep Tayyip Erdoğan and Justice Minister Bekir Bozdağ and İhsanoğlu. Bozdağ, who was then deputy prime minister called for İhsanoğlu's resignation after his statements.
RELATED TOPICS