Arınç: Turkey do not support the partitioning of Iraq 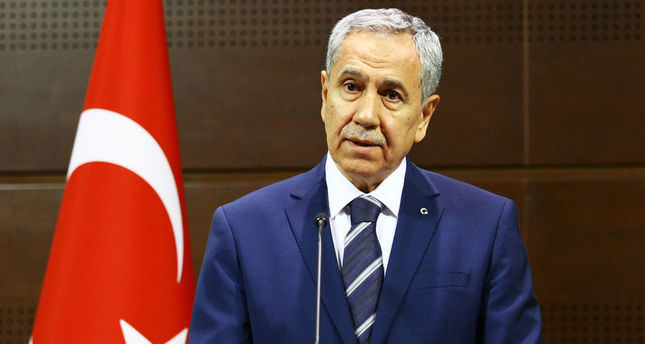 by AA Jul 01, 2014 12:00 am
Turkey will never support a disintegrated Iraq, Turkey's Deputy PM said in a press conference Monday in relation to Israeli PM Netanyahu's statement regarding the establishment of a Kurdish State.

Turkey's Deputy PM Bülent Arınç said that the division of the Middle East as proposed in Netanyahu's statement made on Sunday at Tel Aviv University's INSS think tank by endorsing the independence of Iraqi Kurds, will best serve the interests of Israel and shows Netanyahu's desire to bolster Israel's economic and security ties with the Kurds.

Israel had tried to cement its relations with Iran, Turkey and the Kurdish region in northern Iraq in the 1950's at a time when Kurds were looking for international support to establish their own state in northeastern Syria, northern Iraq, northwestern Iran and southeastern Turkey.
Arınç replied to the recent statement of the Northern Iraqi Kurdish Administration President Massoud Barzani regarding the status of Kirkuk and said, "There is no change in Turkey's stance on the status of Kirkuk in Iraq."

Turkey supports the retention of a special status for the oil-rich city of Kirkuk where all local communities - Turkmen, Arabs, Kurds and others can share its resources while the Northern Iraqi Kurdish Administration claims it to be an integral part of its territories.
Massoud Barzani, the president of the semi-autonomous Kurdistan Regional Government, has taken a hard line on gains that his forces have made in the conflict.

Kurdish Peshmerga forces took the oil-rich city of Kirkuk on June 12 after Iraqi security forces withdrew as militants led by the self-proclaimed Islamic State of Iraq and al-Sham (ISIS) drew close to the city.

Arınç declared that as yet there is no positive development in the task of safely returning Turkish citizens captured by the ISIS in Mosul in Iraq.
ISIS seized the northern Iraqi city of Mosul in an operation on June 10, which they followed up by advancing on other Iraqi cities and attempted to move towards the capital Baghdad.

ISIS attacked the Turkish consulate, abducting 49 staff members. Turkey was unable to evacuate the staff because local police and soldiers guarding the consulate were removed from duty by the local administration.