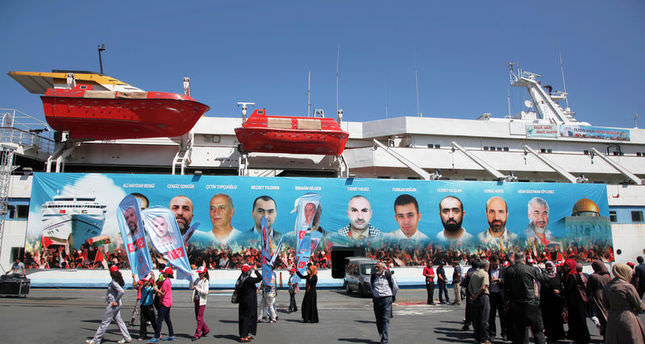 by Ragıp Soylu Jul 02, 2014 12:00 am
Federal Bureau of Investigation (FBI) Director James Comey said on Monday that the agency had launched an investigation into the kidnappings of three Israeli teenagers in the West Bank as soon as they went missing. The reason behind the rapidness of American officials was that one of the murdered individuals was an American citizen. The move contradicts the Obama administration's previous decision related to the murder of Furkan Doğan, a Turkish-American citizen killed by Israeli soldiers in 2010 during the raid on the Mavi Marmara, carrying humanitarian aid to the Gaza Strip. The Obama administration chose to "trust" the Israeli authorities with regard to the investigation of Doğan's murder then, and the FBI has never asked a single question about the incident.

In a press conference in June 2010, White House Spokesperson P.J. Crowley said that the U.S. government had the option of conducting its own investigation into Doğan's death, but preferred to work with Israeli authorities. He said the Israeli government was fully capable of conducting a fair, credible and transparent investigation.

The Daily Sabah asked White House officials whether their opinion about Israeli authorities' capability had changed since that time, as the FBI has taken a different approach to the recent murder of an Israeli-American teen. White House officials declined to comment on the issue and said that the FBI itself should clarify such an inquiry.

The government's emails and cables, which were obtained by the New York-based Center for Constitutional Rights in a series of Freedom of Information Act (FOIA) requests regarding the United States government's knowledge of the Gaza flotilla in 2010, shows a general disregard by the U.S. government towards Doğan, despite his father's intensive calls to the U.S. Embassy in Ankara for information about his son's safety during the Mavi Marmara incident. In a call dated June 2010 to Richard Appleton, the managing director of the office at the State Department, Professor Ahmet Doğan asked why the United States government had not done anything to locate his son and whether it was "because this child was a Muslim."

The United States is very well known for its tolerance towards severe Israeli actions against American citizens. American activist Rachel Corrie was run over twice by an IDF bulldozer and died in 2003. Jewish-American Emily Henochowicz lost her eye to the Israeli Security Forces' violent treatment of dissent when she was shot in the face with a high velocity tear gas canister in 2010. In both cases the American government did not pursue a tougher approach towards the Israeli government.

However, no one really understands the reasoning behind the Obama administration's negligence concerning Doğan's murder. Although Secretary of State Hillary Clinton raised the issue with her Israeli counterparts in June 2010, the Israeli government insistently refused to provide the required information and findings on Doğan's murder until their own investigation had ended.

Finally, the Israeli investigation, led by the Turkel Commission, released its report in January 2011, and it did not include any information about how Doğan was killed. This, too, did not necessarily prompt the administration or the FBI to take the matter seriously and launch a separate
investigation.

Government documents reveal that Kevin Perkins, the assistant director of the Criminal Investigative Division of the Justice Department, instructed Amy Hess, the section chief in the International Operations Division of the FBI, "to check out whether a U.S. citizen had been killed during the Israeli commando raid on the flotilla" in the summer of 2010.

One memorandum written by a trial attorney from the Human Rights and Special Prosecutions Section, entitled "transfer of documents to possession of the FBI," proves that the bureau had received Doğan's folder but still did not move.