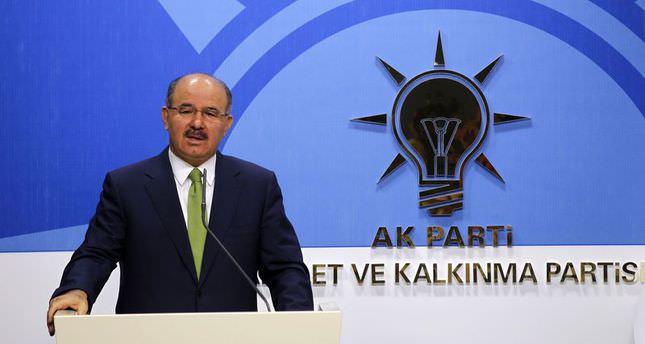 by Daily Sabah Jul 03, 2014 12:00 am
AK Party's Vice President Hüseyin Çelik has responded to questions following the party's Central Decision-making and Administration Meeting (MKYK) and made compelling remarks about Recep Tayyip Erdoğan's presidential candidacy as he claimed the prime minister's candidacy and the search for a new one will not divide the party into different factions.

Çelik panned those who claim Erdoğan should resign before he runs as president as he explained there is no constitutional or electoral regulation that necessitates the resignation of the prime minister or ministers if they want to run for president and he noted the issue of such resignation is unprecedented throughout the world. "The prime minister will surely abide by all regulations under the scope of electoral silence" said Çelik, who stated demanding anything further than this is unreasonable.

Çelik also criticized Kemal Kılıçdaroğlu, who recently outlined 10 reasons on who cannot become a president by attributing them to Recep Tayyip Erdoğan. He questioned Kılıçdaroğlu's statements by saying that the CHP seems to have failed to find someone among party members who is not a liar, a thief and is not corrupt. He also stated the joint declaration of the opposition parties was meaningless as most of them are inactive and do not even have caucus in the Turkish Grand National Assembly (TBMM).

Expressing that the AK Party does not occupy itself with temporary matters but focuses on long-term strategies and programs, Çelik stated the issue of who will become the next prime minister will not be in AK Party's agenda until the presidential elections are finalized, which he claimed would be on August 10 when Erdoğan is elected as president in the first round. "Our main goal until then is the presidential elections" said Çelik.
Çelik also touched upon the fact that such scenarios have existed since the establishment of the AK Party when Erdoğan was banned from politics but was still able to conduct the party's elections campaign in 2002, which resulted in the election of 363 deputies. "There was no division or conflict within the party even though Erdoğan could not get elected as a deputy due to his political ban" said Çelik, who noted Abdullah Gül became the prime minister but he resigned out of courtesy when Erdoğan was elected as a deputy, which he claimed was all decided through consultation. Çelik stated those who are looking forward to conflict within the AK Party will be greatly disappointed as the party's and Turkey's future is far more important for AK Party than personal interests.

Commenting about the vision of presidential elections, Çelik stated their campaign would entail a grand vision, which will not focus on minor details. For instance, he noted the vision could include where Turkey is headed, what global developments mean for Turkey, how we evaluate the justice system and human rights and what standards of democracy mean for us. On the other hand, Çelik explained their slogans will not solely focus on election pledges but will also include AK Party's performance in the past twelve years.