Parliament should be included in reconciliation process with Kurds, says joint candidate İhsanoğlu 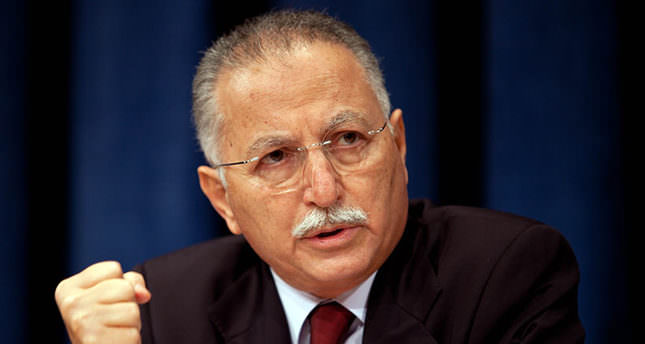 Using the "Good Friday Agreement" between the British government and the Irish Republican Army (IRA) as an example, İhsanoğlu stated that after a certain period of time Parliament should be included in the reconciliation process that started between Ankara and the Kurds in 2013.

Speaking on a TV program aired on CNN Türk, İhsanoğlu spoke with journalists about various issues on Turkey's agenda ahead of the Aug. 10 presidential election.

The speech saw İhsanoğlu break his silence on the current reconciliation process that aims to solve the Kurdish question, an issue that the MHP has a harsh and uncompromising stance on. He said that the country had been used to solving problems by force for years, but this approach needs to be changed and that among the alternatives is to solve the Kurdish issue through reconciliation, democracy and human rights.

He added that different ethnicities had lived in peace in Anatolia, but when the modern Turkish Republic and nation state was officially established, rifts began to appear.

Touching on regional developments on the country's agenda these days, İhsanoğlu stated that a democratic and constitutional regime has never been ensured in the Middle East. "Incidents in Tunisia in 2011 were called the Arab Spring, but no, it was not. Issues in the Middle East are the fall season of Arab leaders. But now, we [the region] are dealing with political forgery over violence, terrorism and sectarianism. Iraq is being divided into three parts, and the constitution established by the U.S. was a constitution based on sectarian discrimination."

İhsanoğlu recognized the Alevi issue in Turkey. Following the Alevi foundation's statements that they will not support İhsanoğlu in the presidential election, the joint candidate asserted that he has a compromising stance on Alevi's demands, and if he takes the presidential post, he will do his best to meet these expectations.

Denying allegations that he is at odds with Atatürk, the founder of the modern Turkish Republic, İhsanoğlu said, "Denying Atatürk means denying Turkish history."

Harshly criticized by several groups and the government for his silence against the military coup in Egypt on July 3, 2013, İhsanoğlu said that he is against military coups, and a constitutional system, democracy and elected government should be ensured in Egypt.

He added that he did not congratulate Egypt's Coup leader Abdel-Fattah Al-Sissi after he was elected as president. Reiterating that he is against military coups, İhsanoğlu stressed that the discourse behind foreign politics should be different from that of domestic policy.