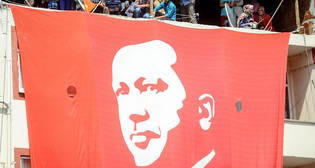 by Daily Sabah Jul 06, 2014 12:00 am
An armed man has been detained after trying to approach Prime Minister Recep Tayyip Erdoğan in the Black Sea province of Samsun.

Erdoğan attended an opening ceremony of the new municipal building in Samsun, on Sunday. After stepping off the bus he was transported there with, an unidentified person approached the Prime Minister and mixed in between lawmakers of the ruling AK Party who were part of the official visiting group.

Security guards immediately removed the man from the crowd after realizing he had a gun. He was detained when it was understood he was not a policeman or an officer.
Last Update: Jul 06, 2014 6:16 pm
RELATED TOPICS