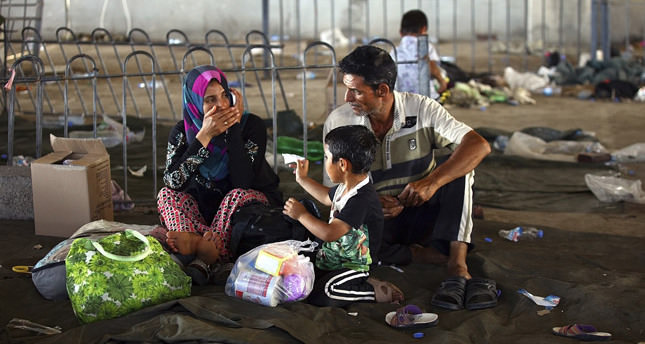 by AA Jul 10, 2014 12:00 am
There is no food, no electricity and no security. People are helpless. They need help, but what help is coming is insufficient. Iraqi Turkmens in Turkey claim their families back home are among the most affected people caught up in the recent conflict sweeping across Northern Iraq. A 3 million-strong Turkmen community is the third-largest ethnic group in Iraq, constituting 13 percent of the population. "The situation is very bad in Diyala. Some people are fasting but others say they were already fasting because they don't have anything to eat," Mohammed Beyatlı, a civil servant from northeastern Iraq told Anadolu Agency (AA).

Turkmens have been caught in the crossfire as Iraq experienced a marked increase in sectarian violence between Sunni and Shia Muslims in June, as a coalition of armed opposition groups led by the Islamic State of Iraq and the Levant, ISIS, took control of large swathes of the country's predominantly Sunni provinces.

On June 10, ISIS-led fighters captured Iraq's second largest city of Mosul and soon afterwards took control of a number of other key cities and towns including Tikrit, Tal Afar, Fallujah and Baiji.

Ten children died recently of hunger and diseases in camps near the northwestern Iraqi city of Tal Afar, according to the Iraqi Turkmen Front - a mainstream political group representing Turkmen interests. "Humanitarian aid has not reached Tal Afar. People suffer from food shortages.

During the holy month of Ramadan everything is very difficult," said Aytekin Felaferoğlu, a Turkmen student in Ankara, whose family is in Tal Afar.
Tal Afar, with a population of around 200,000, people was captured a week after ISIS militants took Mosul and Saddam Hussein's hometown of Tikrit.

Kemal Ahmed, 28, another Turkmen student in Ankara originally from the oil rich city of Kirkuk, asked for much more help from Turkey, "We expect everyone to receive humanitarian aid. Materials are not enough."

Kirkuk has fallen into the hands of Kurdish peshmerga fighters, as the Iraqi army fled their positions. "People are stuck between conflicts of peshmerga forces and ISIS militants in my city," Ahmed said. He added, "ISIS cut off Internet access. We have communication problems there as well as other humanitarian problems [like food and water shortages]."

The Turkish Cooperation and Coordination Agency has sent 60 tons of food and cleaning supplies to families in northern Iraq so far. Six Turkish
officials sent by the Foreign Ministry are also in Irbil to coordinate humanitarian aid efforts.

Within one month of the start of the conflict period, thousands of people had to flee from their homes, but some are returning rather than settle in another place that is also not secure. "My family keeps leaving home to go to another town, but they say they will die anyway anywhere. So they have recently returned home instead of fleeing," Felaferoğlu said.

Since the beginning of June, 650,000 people have been displaced because of operations by ISIS, according to the UN Office for the Coordination of Humanitarian Affairs. The Iraqi Turkmen Front says 200,000 of them are Turkmens.

Most of the Turkmens living in Mosul, Tal Afar, Kirkuk, Dohuk, Diyala and Salahaddin went to nearby towns or cities like Irbil. But some of them - who have passports - preferred to come to Turkey, as they share the same language.

Ahmed Nadir Yusuf, a 28-year-old truck driver, is one of them. He came to Istanbul from Tal Afar together with his four children and moved into an apartment after staying on the streets and an office of the Federation of the Türkmeneli Associations. He said that the situation was bad at home: "No one has remained in our city. People ran away from Tal Afar. Helicopters were always conducting attacks."

As ISIS militants vow to continue toward Baghdad, Turkmens say it is difficult to think that everything will return to normal. "If the situation remains like that, we cannot return to our country, which is very sad," Yusuf said.
RELATED TOPICS