Erdoğan's presidential vision sees the dawn of a new Turkey 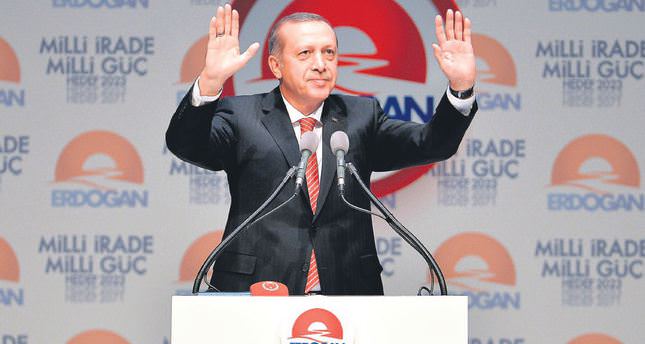 Erdoğan on Friday sketched his vision of a new Turkey with democracy and freedom taking precedent, where no one faces discrimination, if he is elected president in the Aug. 10 election

Prime Minister and Justice and Development Party (AK Party) presidential candidate Recep Tayyip Erdoğan on Friday presented his "presidential vision document" that includes what he pledges to do if he takes the presidential seat after the Aug. 10 presidential election. He said that during the AK Party's 12 years in power, the party has supported freedom for all citizens and never discriminated.

He signaled that his presidential vision gives priority to being an inclusive president and upholding democracy and freedom in the country. The Aug.10 election will be the first time the president will be elected directly by the people, rather than by the Parliament. Addressing nearly 10,000 guests from different circles at a convention overlooking the Golden Horn in Istanbul, Erdoğan presented his roadmap for the government's 2023 goals that focus on social, financial and political targets for the 100th anniversary of the Turkish Republic.

Accepted as the most influential politician in Turkey's history after the founder of the modern Turkish Republic, Atatürk, Erdoğan tackled many issues, such as a new constitution, the Kurdish reconciliation process, the Alevi issue, the EU accession process, Turkey's foreign policy, new reforms to expand fundamental rights and freedoms and universal principles of justice and the rule of law in his vision document called "on the way of new Turkey."

In his vision document, which has the characteristic of a "manifesto," the AK Party presidential candidate stated that his vision document has three headings: Democratic Administration, Public Prosperity and Leading. He added: "A new constitution means a new future. If I get elected as the next president, a new constitution will be a priority for me."

Highlighting that Turkey's decades-long terror issue and hijab ban are the results of the status quo's resistance to change, Erdoğan praised Parliament for approving the reconciliation bill that brought the Kurdish issue to a legal ground and echoed that the AK Party abolished the hijab ban in the country.

Praising the nation's will, Erdoğan added, "Despite the harsh pressure of the status quo, the nation's desire to change was never lost." "We [AK Party] wanted democracy for all.

We wanted freedom for all. We stood strong against all sorts of tutelages. We say 'No' to coup attempts and plots against the government.

We purged all sort of mafias surrounding the state. We say that it is time to form the government through the ballot box." "Before we came into power, the priority was the state not the people. We've turned this the other way around," said Erdoğan.

Erdoğan lambasted Turkey's opposition Republican People's Party (CHP) and Nationalist Movement Party's (MHP) failure in politics. He said that
the biggest problem in Turkey is the opposition, and the opposition is deaf against calls for change.

Denouncing the Gülen Movement, which infiltrated the police and judiciary with an aim to overthrow the government through the Dec. 17 operation and the Dec. 25 operation, which were conducted under the mask of corruption and illegal wiretapping scandals against Erdoğan and his close family, the AK Party presidential candidate said: "If the Dec.17/25 coup attempts were successful, we [key governmental figures] would now be standing trial. But, we fight not for ourselves, but for the nation."

Daring the Gülen Movement, Erdoğan said that he will never let organizations and movements exploit religion when he gets elected as the president.

The AK Party presidential candidate touched on economic development during the AK Party's 12-year-term in office and said that the main goal of the AK Party's 2023 vision is to put Turkey among the top 10 countries in the world with a more unified state for an increasingly diverse society and with a more developed economy. He added that Turkey would continue its EU bid at full steam.

Erdoğan criticized CHP and MHP joint candidate former Organization of Islamic Cooperation (OIC) Secretary-General Ekmeleddin İhsanoğlu's
remarks that Turkey should be unbiased in its foreign politics and should have not opened its doors to Syrian refugees.

He said, "Turkey's doors will always be open to oppressed people [including Syrian refugees.]"

Touching on Israeli airstrikes on the Gaza Strip, Erdoğan stated that Israel should ensure a ceasefire. Calling on Israel, Erdoğan said Turkey can't normalize its ties with Israel as long as Palestinians are getting killed in Gaza. Accusing Israel of being insincere, Erdoğan said: "They are saying rockets are fired into Israel. How many got killed? Their lives are based on lies."

Later in his speech, Erdoğan called on the Islamic State of Iraq and al-Sham (ISIS) to release abducted Turkish citizens in Iraq after ISIS attacks in the country. Erdoğan said, "If you are Muslim, this oppression of yours cannot continue." "On Aug. 10, you will not elect a president but will open the doors of the 'New Turkey'," said Erdoğan, concluding his speech among chants and slogans.
Last Update: Jul 12, 2014 1:13 pm
RELATED TOPICS