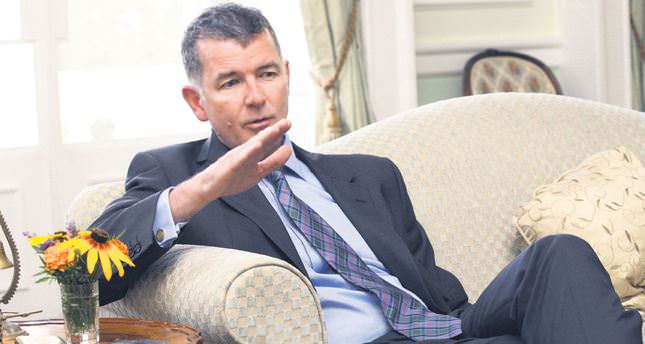 Moore believes the U.K. has a similar stance to Turkey's towards the territorial integrity in Iraq as debates on an independent Kurdistan rage amid the conflict

Bilateral relations between Turkey and the United Kingdom have gained momentum in the last decade and both countries enjoy high levels of cooperation in various fields. From the latest developments in the Middle East to Turkey-EU relations and Cyprus peace talks, there are many issues on which both countries are cooperating closely.

Daily Sabah: Britain has always been supportive of Turkey's EU bid. Considering the economic and political crisis that Europe faces which has led to a decreased capacity to absorb new members, where do you think negotiations will head? Do you think there is a deadlock in Turkish-EU relations?

Richard Moore: I am more positive. I don't think it's a deadlock. Up until 2013 we were in a difficult period. The word deadlock would have been perfectly fair to describe it.

After the great promise of the early years of 2003-5, it felt like everything was moving in a positive direction. Then we had a more difficult period. In 2014, you had a successful visit by the prime minister to Brussels where he saw Van Rompuy, Barrosso and Schultz.

So, we started to make some progress. Then, if I'm honest, we look at some of the legislation introduced in Turkey earlier this year that caused concern both in Brussels, in the mind of Mr.Füle and across the rest of the EU. Some of the legislation we felt should have been more carefully consulted on, not least to reflect EU concerns. That said I have to say that recently, I have detected a real determination in Ankara, to get things back on track.

The U.K. is pushing hard for reforms in the EU. I am sure the EU that Turkey will join won't be the Union of 2014; and you can bet your life that the Turkey that joins the EU will be a very different Turkey than the one it is now.

I remain positive about the EU. There are too many people, particularly within the Turkish government; who understand the importance of the EU to Turkey.

DS: You have been in Ankara as British Ambassador since January however you worked in Turkey for almost 20 years. What do you think the most important changes of the last two decades in Turkey have been?

RM: Economically, this country is in a fundamentally different place from where it was in the 1990s. I remember we just had witnessed Özal's reforms; Turkey was opening up to the global economic system. If you want to understand how Turkey has changed in the last 20 years, go to Gaziantep.

Even more than Istanbul, Ankara or any such place, go to Gaziantep; it's remarkable. Economically people are richer and it's a more developed economy undoubtedly.

Twenty years ago people's attitude on the Kurdish issue or Armenians was still very old-fashioned, but that has really changed.
The people have a proper debate about that.

Bureaucracy is more open-minded now. The solution process is hugely positive. So there is a shift I think here as Turkey has become more confident, more outward looking; this affects its economy, its foreign policy.

DS: As a representative of one of the guarantor states of Cyprus, how do you evaluate the current peace talks?

RM: Leaders of the two sides of the island are talking and that's a very good thing. Both communities can see the economic opportunities that would come out of a settlement. Energy, water supplies are a great driver for solution . But I have been following the Cyprus situation for 25 years and we still don't have a settlement. There are decades of distrust between the two sides. A solution will still require more leadership from Ankara, from Athens, from London, from Washington and the support of the U.N. to get us over the line. I'm hopeful but I'm also realistic that there is a lot of hard work to be done.

DS: After nearly a century of foreign presence in the greater Middle East region, how would you evaluate the recent developments in Iraq and Syria? What's U.K.'s stance on an independent Kurdistan?

RM: It's the same as Turkey's. We think that what we need is a unified Iraq. We think the territorial integrity of Iraq is really important. We are very clear with the KRG that we recognized the need for them to protect their security.

ISIS represents a genuine threat and the KRG has every right to defend itself against that threat. Ankara and London have a very similar view on that. And we also say the time is not right, to be pushing for independence.

The answer in Iraq is a genuinely inclusive government; it is a government in Baghdad which genuinely includes, on a position of equality, Kurds, Sunnis and Shias. The current government in Baghdad has not pursued an inclusive agenda. Turmoil in Iraq has opened up a space for ISIS, which is an awful terrorist organization. We need to make sure that the broad mass of Sunnis in Iraq feels that they have a state and a government that represents their interests and so they do not feel inclined to support ISIS.

We and others are calling on Iraqi politicians to come to an inclusive agreement.

DS: Iraqi cities are falling like dominoes to ISIS. How would you evaluate it and how do you think the fight against ISIS should be?

RM: I find some of the more recent events around ISIS hard to understand, including how the Iraqi military collapsed as quickly as they did in Mosul. The army ran and ISIS took advantage of that. They are richer and better equipped as a result. ISIS represents a genuine threat. They have driven certain Sunni opposition elements into the hands of the extremists.

For the time being, frankly, every friend of Turkey is focused on the hostage crisis. We're ready to help if needed in order to get them home safely. Once that happens maybe we can look again at what we can do on ISIS. But of course there is a lot of cooperation that goes on behind the to defeat the aims of organizations like ISIS or al-Nusra. Cooperation between the UK and Turkey is extremely close and effective.

In terms of military action, there is no prospect of British military action in Iraq or Syria. Our parliament is clear on that. But this is a problem for all of us. This sort of extremism and the attraction it provides to youngsters is a real problem. We need to make sure that in supporting the moderate Syrian opposition, we don't inadvertently help groups like ISIS and al-Nusra.

Cooperation on security issues is one thing, but the most important point is to address the root causes of radicalization. That is why I'm a little positive. I don't think groups like ISIS will generate Islamophobia. This certainly hasn't happened in my country. In the U.K. we have a very large Muslim population and people clearly recognize that groups like ISIS do not represent Islam.

DS: Home-grown terrorists are the new threats for the Western World and some foreign media outlets criticized Turkey to for not being cooperative on this issue. What can you say about it?

RM: I'm not, you will never find me criticizing Turkey on this issue and there is a reason for this. Both of our countries have bitter experience in fighting terrorism. The organizations that deal with this in Turkey are highly professional. This, coupled with political will on both sides, means we have a very good partnership.

DS: Turkish and British politicians mutually describe the bilateral partnership between our counties as a golden age. From your point of view what are the main reasons for this positive bilateral relationship?

RM: The first thing is; we have no major bilateral dispute. We have a very similar view of the world. The U.K. and Turkey are both trading countries, we both believe in a fundamentally free market, we are members of NATO and also if you look at the various issues that I mentioned earlier like Syria and Somalia we tend to be on the same side.

We may have tactical differences or disagreements on some issues, but we don't let this get in the way of business. DS: It was announced that the British Embassy in Iran will re-open. Regarding this issue, Foreign Secretary William Hague said that the circumstances were right to re-open it. What has changed?

RM: Iran has a new President and a new foreign minister. We need to talk to each other and it's difficult to do that when we don't have an ambassador. We now would like to see real progress on difficult issues, in particular the nuclear file. If we can secure an agreement on this issue then sanctions will be lifted. This would be massively good for the Iranian people and good for the wider region including Turkey.

We also want to see a more responsible Iranian approach on Iraq and Syria. They still have invading power in Iraq and Syria. Basically they have to decide what kind of future they desire and act accordingly.

DS: How would you evaluate the ongoing Kurdish reconciliation process?

RM: We are hugely supportive, and think that the government deserves a lot of credit for it. This is clearly key for Turkey's long term stability. We are very keen to share our experience in Northern Ireland. But every country is different; I don't want to make easy comparisons but if Turkey can learn any lessons from our own hard experience, then that would be positive.

DS: What can you say about the GREAT Campaign?

RM: Turkey is a big focus for this campaign. GREAT is designed to make sure that public perceptions about the U.K. are grounded in reality. There is still a slight problem here in Turkey. People think the U.K. is all about Queen Elizabeth, nice castles, nice suits etc. They don't have a sense of our world class science, innovation and manufacturing.

The GREAT Campaign is helping us to dispel some of these myths, and highlight opportunities for more business partnerships. We want to promote the U.K. as a GREAT place to visit, study and do business.
Last Update: Jul 14, 2014 12:14 pm
RELATED TOPICS