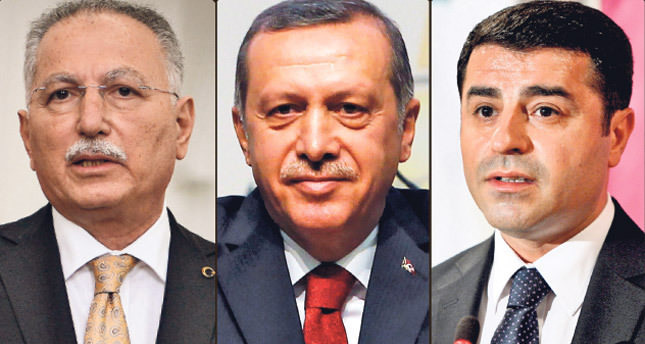 Turkey will elect its president with a popular vote on Aug. 10. Candidates will work with advertising companies which will design their logos and make slogans as the candidate look to win more voters

Özlem Gürses, who has worked as a journalist, an anchorwoman and communications specialist has noted she voluntarily works for Ihsanoglu's campaign and has joined it about two weeks ago based on suggestions from mutual friends.

Gürses expressed that things would have been different if the election campaigns started earlier with equal political and financial conditions and claimed there is an unequal playing field as Recep Tayyip Erdogan is allegedly prioritized in the media and has more privilege.

She claimed Prime Minister Recep Tayyip Erdogan was at a disadvantage due to the fact that he is working with the same team for his presidential election campaign for the past 12 years to and stated this will benefit Ekmeleddin Ihsanoglu's campaign. Likewise, she stated they were at an advantage because their campaign was run by volunteers who do not have financial, status, power or other types of self-interest but rather help out solely because they believe in the cause.

On the other hand, she responded to criticism about the discrepancy between Ihsanoglu's previous remarks when he claimed the president would not actively participate in making roads yet his campaign slogan "Ekmeleddin for bread" had the notion that the president would bring prosperity and welfare to the people. "Of course the president would not make roads, but he could encourage politicians to do so," said Gürses, who stated there are no contradictions in Ihsanoglu's remarks. Moreover, Gürses claimed Erdogan wants to rule Turkey by himself without seeking other people's opinions whereas she claimed Ihsanoglu was all about listening and consensus and that Ihsanoglu would never adopt a radical language prior to the elections.

Arter Agency, known for carrying out the political campaigns of the AK Party will also handle Erdogan's presidential election campaign according to Erol Olçak, who is the president of Arter.

In response to a question about the company's history in working with AK Party, Olçak expressed there are more advantages than disadvantages. "You get a better grip over the leader's characteristics, features, performance and team" said Olçak, who noted working for a long period of time allows them to work without receiving briefings while he explained they consistently renew themselves as an agency and Erdogan does the same with every election. He stated there is a professional team behind Erdogan's campaign and a strategy team composed of eight people who are volunteers and come up with ideas and strategies while the professionals focus on the design of the campaign. Olçak noted Erdogan's campaign will mostly consist of volunteers who make the campaign much more interesting and entertaining.

On the other hand, Olçak expressed a successful election campaign does not require huge sums of money contrary to what many people think. He noted his relationship with Erdogan was not based on money but rather described himself as a friend of Erdogan in his political journey. "I receive many proposals to handle political campaigns for others but would never work for another party" said Olçak, who stated he would love to take care of a political campaign in England or the US.

In response to comments about Erdogan's logo, Olçak stated the path in the logo symbolizes Erdogan's political journey along with Turkey's journey, bringing democracy, welfare, freedoms and prosperity in the country.

Olçak also expressed Erdogan was easy to work with but he is a perfectionist and wants everything on time. "I am a lucky advertiser because I work with an extremely successful leader" said Olçak, who expressed the success of an election cannot be attributed to the campaign alone.

Saruhan Oluç, who is the vice president of HDP has expressed the elections were not fair because Erdogan receives more media coverage while he noted their political campaign will not be extravagant as it is against their values. Likewise, Oluç criticized Ekmeleddin Ihsanoglu for releasing his campaign program under the title of "bread" in a luxurious hotel along the Bosphorus and claimed it did not seem very sincere. He expressed they conducted a series of meetings to discuss who their candidate should be and the process was very democratic. On the other hand, Oluç stated they have professionals who work for advertisement agencies who will take care of the campaign logo and other technical details at no cost. He added that Demirtas's constant appearance with a smile on social media was not a strategy but was his real character. Oluç also touched upon the fact that they think it is important for candidates to appear in front of the people to convey their messages.

The first round of presidential elections will be held on August 10 when Turkish people will be able to vote for the president for the first time. Turks abroad will also be able to participate at designated polling stations and embassies.
RELATED TOPICS