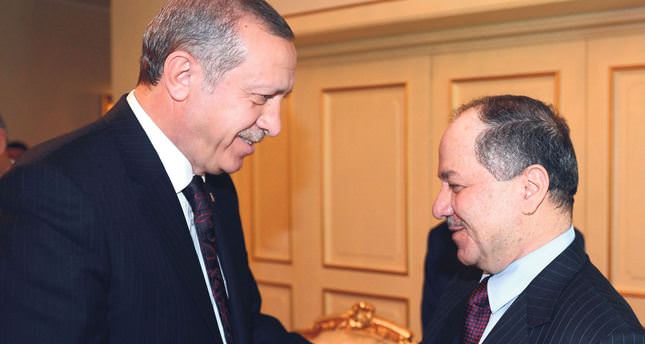 KRG President Barzani was told the timing for a push for independence is not right, while top Turkish officials try to formulate a joint strategy against the ISIS threat

While Iraq's parliament has failed to overcome differences and form a new government to end the country's political deadlock, officials from Turkey and Kurdistan Regional Government (KRG) are continuing to work closely. Last November KRG President Massoud Barzani paid a historic visit to Diyarbakır. Yesterday's visit was his first to Ankara amid the ongoing uncertainty in Iraq. Barzani and his delegation visited Ankara yesterday and met with President Abdullah Gül and Prime Minister Recep Tayyip Erdogan.

Barzani also met with Foreign Minister Ahmet Davutoglu at an iftar meal. According to sources, Iraq's political future, the situation of Turkish hostages kept by the terrorist group Islamic State of Iraq and al-Sham (ISIS), and energy cooperation between Turkey and the KRG was on top of the agenda during meetings between Turkish and Kurdish officials.

In the last month Kurds have taken control of oil-rich Kirkuk amid an advancing ISIS insurgency and recently Barzani called for a referendum in Kirkuk to determine the future of the city which is home to ethnic Arabs, Kurds and Turkmens. The Kurdish leader Barzani also expressed their intention for an independent Kurdish state several times through different media outlets. Moreover, last week Barzani stated that he believes Turkey is unlikely to oppose an independent Kurdistan state if a pledged referendum for independence goes ahead.

Besides this several Kurdish lawmakers announced last week that Barzani had asked parliament to choose a date for the vote to organize a referendum. Whereas, according to sources from the prime ministry , Turkish officials told Kurdish leader Barzani that the territorial integrity of Iraq is still Turkey's priority and encouraged the Kurdish delegation to continue their efforts in forming a new inclusive government in Iraq. Turkish officials believe that declaring an independent Kurdistan may increase conflicts in the region and may even cause a regional sectarian war and these potential developments may put the KRG region in the middle of sectarian conflicts.


Therefore Turkish officials shared their view with the Kurdish delegation that the idea of an independent Kurdistan has not yet fully matured and pushing for independence may destabilize the region further. The situation of Iraqi Turkmens and abducted Turkish citizens by ISIS militants was also discussed with the Kurdish delegation. Turkmens have been caught in the crossfire as Iraq saw a marked increase in sectarian violence between Sunni and Shia Muslims in June, as ISIS took control of large swathes of the country's predominantly Sunni provinces.

In recent weeks Turkey announced to establish a tent city and send humanitarian aid sufficient for 20,000 people to Northern Iraq's Tal Afar district and Turkey's Foreign Ministry said the Turkish Red Crescent and the country's disaster relief authority will arrange the aid. The latest developments in relief work and areas of cooperation in this field discussed with the Kurdish officials.

The 49 abducted Turkish consulate staff members, including the consul-general and family members also was on the agenda of the meeting. On June 11 ISIS militants abducted 49 Turkish consulate staff in the Iraqi city of Mosul. Foreign Minister Ahmet Davutoğlu recently said the government is continuing to work for the release of the kidnapped citizens, but has asked for the public not to speculate about the incident lest it place the abductees in harm's way.


Energy was also another important issue of the agenda. Kurdish media outlet Rudaw reported on Sunday that the Kurdish delegation came to Turkey to collect the Kurdish share of revenues from the sale of Iraqi oil, deposited in Turkey's state-owned Halkbank.

However, Turkish Energy Minister denied the allegation and said that the Kurdish delegation wants to turn temporary bank accounts opened for that purpose into permanent accounts. Yıldız also added that Turkey is not working on a new formula that would open the way for the Kurds to take their share from the entire Iraqi oil sale.

The KRG region is facing a major shortage of fuel, especially gas and diesel, after ISIS militants took control of Iraq's biggest refinery in Northern Iraq last month and since that time Turkey has shipped 9,000 tons of refined oil products to the KRG daily whilst being requested by the KRG to increase that amount to 13,000. Turkey plans to meet KRG's additional demand for oil possiblesolutions including the establishment of refineries also discussed during the meeting.