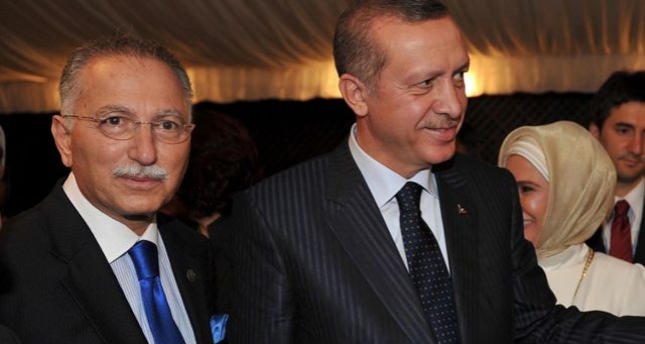 The countdown has started ahead of Turkey's first popular presidential election and according to pollster ANAR, Turkish prime minister and AK Party presidential candidate Recep Tayyip Erdoğan will win the presidency with 55 percent of the vote.

The poll results suggest that Erdoğan will likely win the election in the first round with the absolute majority of the vote. According to the same poll, Republican People's Party (CHP) and Nationalist Movement Party's (MHP) joint presidential candidate and former Secretary-General of Organization of Islamic Cooperation (OIC) Ekmeleddin İhsanoğlu will likely receive 38 percent while pro-Kurdish People's Democratic Party co-chair and presidential candidate Selahattin Demirtaş is expected to take 8 percent of the vote.


Evaluating the electoral campaigns and slogans used ahead of the upcoming presidential election, ANAR head İbrahim Uslu commented on İhsanoğlu's campaign and stated that İhsanoğlu remained inept at rhetoric despite his academic and scholarly background.

"His performance was not satisfying. He poorly reiterated the previous stereotyped responses to political and sociological questions. Personally, I was disappointed."

Uslu said that there will likely be no harsh rhetoric used during the electoral campaign. He added that İhsanoğlu's personality is not suited to using harsh arguments and Erdoğan said he would adopt a positive discourse.

GENAR released a public survey regarding the presidential election last week. The survey predicts that Erdoğan would win 55.2 percent of the vote as Ekmeleddin İhsanoğlu will stay on 35.8 percent.

According to the pro-CHP pollster SONAR, Erdoğan would defeat the opposition CHP and MHP joint candidate Ekmeleddin İhsanoğlu. Among 2,800 surveyed people who live in 26 different cities, 46 percent say that they will vote for Erdoğan.


The numbers of those who said that they will vote for the opposition's joint candidate İhsanoğlu is around 35.3 percent. 6.2 percent of those surveyed stated that they will vote for the HDP. The survey says that the votes of those who remain undecided will split among the candidates, which will increase Erdoğan's votes to 52.6 percent while İhsanoğlu will receive 40.3 percent.
Last Update: Jul 15, 2014 11:39 am
RELATED TOPICS