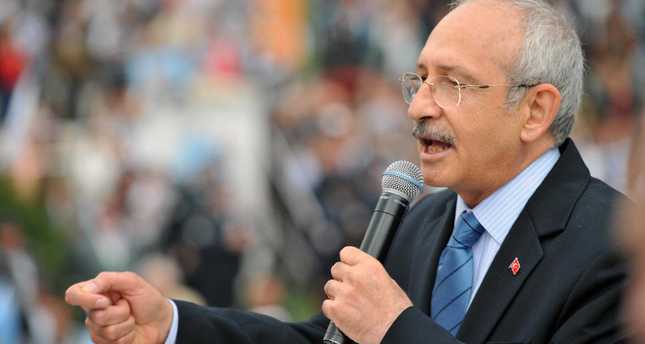 by Daily Sabah Jul 15, 2014 12:00 am
Ahead of the upcoming presidential poll, in which the president will be elected by popular vote for the first time in Turkey's history, political parties are pressing ahead with their election campaigns. Yesterday, the Republican People's Party (CHP) leader Kemal Kılıçdaroğlu convened with former CHP members amid criticism that CHP and Nationalist Movement Party (MHP) joint candidate and former head of Organization of Islamic Cooperation Eklemeddin İhsanoğlu does not represent CHP's political interests.

Kılıçdaroğlu's harsh rhetoric concerning the upcoming presidential election dominated the meeting. Kılıçdaroğlu said in his speech, "If you want to live freely, take a holiday freely, if you do not want anyone to intervene in your life, you have to go to the ballot box and vote for Ekmeleddin İhsanoğlu as a matter of democracy."

Stressing that opposition parties had reached a compromise, Kılıçdaroğlu stated that the compromise is one of the biggest contributions in Turkey's democracy history. "We [CHP] gather political parties that have a different approach than us. This [presidential] election is not a race among parties, but the election of the president.

Surveys said nearly 70 percent of voters want an unbiased president. Then, ask your conscience who is unbiased and who is biased?" While calling for citizens to be given a holiday on election day, Kılıçdaroğlu stated that saying "I will not vote" means one does not believe in democracy.
Last Update: Jul 15, 2014 2:56 pm
RELATED TOPICS