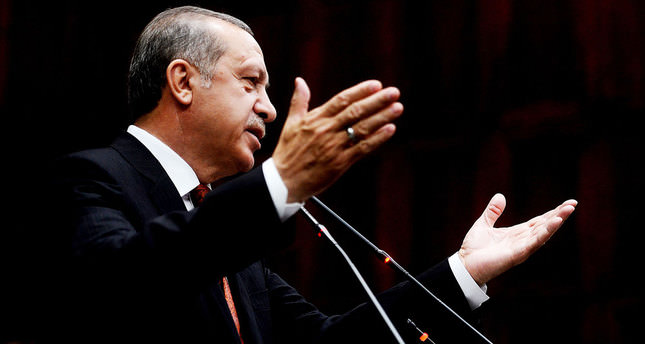 by Jul 15, 2014 12:00 am
Turkish Prime Minister Recep Tayyip Erdoğan on Tuesday stepped up his rhetoric against Israel over its deadly air offensive on Gaza, accusing the Jewish state of committing "state terrorism" against the Palestinians.

Presenting Turkey as the sole country speaking up for the Palestinians, Erdoğan said that any normalization in the troubled ties between Israel and Ankara was currently out of the question.

"Israel is continuing to carry out state terrorism in the region. Nobody, except us, tells it to stop," Erdoğan told members of his ruling party during a parliamentary group meeting on Tuesday, accusing Israel of perpetrating a "massacre" of Palestinians.

"To what extent will the world remain silent to this state terrorism?"

Supporters from his Justice and Development Party (AK Party) often interrupted his address by shouting slogans like "Murderer Israel".

His comments came after a week of the deadliest violence in the Gaza Strip for years which has claimed at least 192 lives, sparking international condemnation.

Israel on Tuesday accepted an Egyptian proposal for a ceasefire, despite a Hamas decision to turn down the Egypt-backed truce.

Erdoğan welcomed the ceasefire proposal as "very positive" and "precious".

"I hope this ceasefire will be secured. But it appears that the blood of innocent Palestinian children is being exploited in the dirty politics of the Middle East," he said.

Erdoğan is due to host Palestinian president Mahmoud Abbas in Turkey for talks on Friday.

Ties between Israel and Turkey hit an all-time low after Israeli marines stormed a Gaza-bound Turkish ship in 2010 while in international waters and killed 10 Turkish citizens on board.