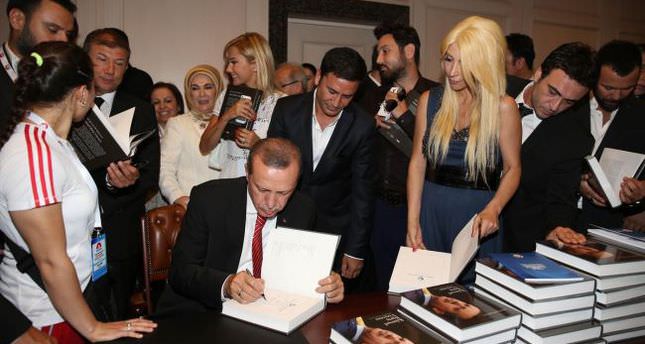 Some of Turkey's most prominent musicians, actors, comedians and athletes rejected criticism directed against them for supporting Recep Tayyip Erdoğan's presidential candidacy, calling on all to respect people's choices

Famous figures and artists who attended this meeting have received stern criticism on social media. This attitude soon went beyond condemnation and turned into a lynch campaign denouncing the public artists for the entire cyber world to see.

The participation of famous artists in Erdoğan's presidential meeting became a controversial topic and was the focus of extensive Turkish Media coverage over the weekend. Sözcü (a radical Kemalist Newspaper in Turkey) gave the following headline on Sunday; "Tayyip'in Papatyaları," or "Tayyip's Flowers," referring to those who attended Erdoğan's meeting. That day, Sözcü shared a photo with their audience which was taken after the meeting showing famous figures with PM Erdoğan. On the same day, the famous TV broadcaster and Sözcü columnist, Uğur Dündar wrote a piece targeting Orhan Gencebay (a very famous Turkish Musician and Bağlama virtuoso) who also attended Erdoğan's presidential campaign meeting. The media's attitude has revived the "neighborhood pressure" discussion again but with a different angle.

Last night, in a TV program Orhan Gencebay gave statements about Uğur Dündar's column and generally touched upon the lynch campaign that is being conducted on social media. "It is an invitation from PM Erdoğan, it is impolite not to accept this invitation," he said.

Gencebay condemned the lynch campaign in the media saying "according to some citizens, you cannot go to this meeting." "Do not ever do or say something that I do not want to hear. Otherwise I will curse and insult you,' they said to me after attending the meeting." He also added, "They say I do not understand democracy, the parliamentary system, or respect diversity in society. This is peer pressure, this is unbelievable and this is marginalizing the society."

While artists who attended Erdoğan's meeting started responding to the lynch campaign on social media well-known comedian Şahan Gökbakar, in his personal twitter account, pointed out the "hypocrisy" of people who insulted him for attending Erdoğan's meeting. In one of his tweets Gökbakar noted "l looked up the twitter profiles that insulted me, and saw each one of them are freedom fighters and defendants of democracy. These hateful words are in contradiction with how those people describe themselves as they claim to be libertarian, democratic and modern."