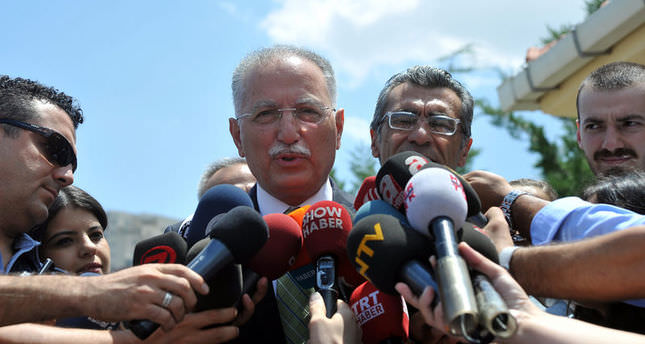 by AA Jul 16, 2014 12:00 am
Turkey's two largest opposition parties' presidential candidate Ekmeleddin İhsanoğlu has criticized the United Nations for not condemning Israel for ignoring its calls.

"You cannot be impartial between the tyrant and the innocent, between the oppressor and the oppressed," İhsanoğlu said Tuesday during his visit to the Palestinian embassy in Ankara.

His remarks came after Israeli warplanes had struck hundreds of civilian residential areas across the besieged enclave, which is home to around 1.8 million Palestinians.

On Sunday, the UN Security Council called for a ceasefire between Israel and the Palestinians in Gaza.

İhsanoğlu said the resolution was not a complete one as it "did not condemn Israel's disproportionate violence while demanding a ceasefire.

"I am pleased to see that a great deal of humanitarian aid has been rushing in to Palestine from Turkey and the government has been taking a number of measures," he said.

At least 200 Palestinians have been killed and more than 1,400 others injured in unrelenting Israeli airstrikes on the Gaza Strip since last Monday.

Gaza-based resistance factions, for their part, have continued to fire hundreds of rockets at Israeli cities in response to the ongoing Israeli attacks.

İhsanoğlu has previously been criticized for stating that Turkey should play an impartial role in the conflict between Israel and Palestine.