Pain has no ethnicity and religion say Turkish Cypriots 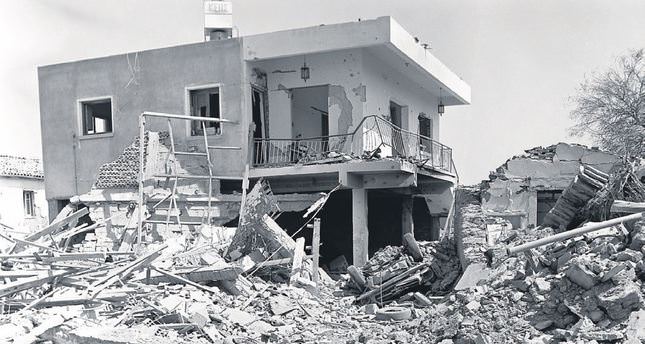 This week sees the 40th anniversary of Turkey's Operation Atilla - the military intervention in the 1974 Cyprus crisis. The search for the remains of those who went missing during those dark days only began in the 2000s

On the 40th anniversary of Turkey's intervention on Cyprus, Turkish and Greek Cypriots remembered family members and friends they lost during the communal violence and said that pain does not recognize borders, religion or nationality. This week sees the 40th anniversary of Turkey's Operation Atilla - the military intervention in the 1974 Cyprus crisis. The search for the remains of those who went missing during those dark days only began in the 2000s.

"Turkish Cypriots are the only community in the world that did not actively search for its missing people," says Sevgül Uludağ, 56, a journalist from the capitol Nicosia on the divided island of Cyprus. This week will see the 40th anniversary of Turkey's 1974 month-long military operation to protect the Turkish population on violence-hit Cyprus, which remains partitioned into Greek and Turkish zones.

Inter-communal violence erupted on the Mediterranean island amid a July 15 Greek Cypriot attempt to annex Cyprus from Greece, which was ruled at that time by a right-wing military junta. Five days later Turkey sent 40,000 troops – Operation Atilla – to the island's north. In the years of violence that gripped Cyprus, around 2,000 people disappeared according to the UN-backed International Committee on Missing Persons (ICMP). Founded in 1981 with the cooperation of Turkey, Greece and the United Nations, the ICMP claims that 1,508 Greek Cypriots and 493 Turkish Cypriots went missing during the violence between 1963 to1964 and the clashes of 1974. After digs started in 2006, almost 400 Greek Cypriot and 125 Turkish Cypriot bodies were identified by the ICMP.

Around 887 sites were excavated and around 910 sets of remains are still being analyzed. Sevgül Uludağ's 2006 book, "Oysters with the Missing Pearls: Untold Stories about Missing Persons, Mass Graves and Memories from the Past of Cyprus – Oral History, Interviews, Articles," collects the stories of the survivors from both Turkish and Greek communities. "Talking about missing people was taboo on Cyprus until I started to write about it," she told Anadolu Agency. However, a delicate process of detente began as Turkey's current Prime Minister, Recep Tayyip Erdoğan, made a speech in Strasbourg in 2004 promising that steps would be taken to identify missing people on Cyprus.

The following year saw the end of the 30-year rule of Rauf Denktaş as Northern Cyprus's president. These changes, and Uludağ's report, created an environment where the first painful steps toward finding the remains of Cyprus's missing people could begin. Speaking on the 180 kilometer U.N. Buffer Zone that still divides the island, one of the survivors of the 1974 violence, a Greek Cypriot pilot called Petros Souppouris, 50, was 10 when gunmen come to the village of Palekythrea. He lost his parents, two brothers, aged 9 and 4, plus his two-year-old sister. He was wounded by three bullets but survived. "We were lucky because approximately an hour after the event the Turkish army came.

We were lucky because of the Turkish army officer, whom I thank was very good. "He took us and brought some doctors and then sent someone to bury the old people – we found them four years ago. We found everyone except my brother Yannis – he is still missing. We didn't find his bones," Souppouris said. Unlike some other conflicts, identifying and prosecuting those responsible is not a primary issue for many Cypriots. "Personally I never wanted to know who did this," Souppouris said. "After so many years I don't want to know. In the name of having peace I don't want revenge." In 2012 Souppouris, along with a Turkish Cypriot, Hüseyin Akansoy, was awarded the European Citizen's Prize for their work in creating reconciliation. Akansoy, now a 58-year-old biology teacher, was born in the Turkish Cypriot village of Muratağa. Around 126 people from the Turkish Cypriot villages of Muratağa, Sandallar and Atlılar, were killed in 1974 and buried in a mass grave in a garbage dump. "I was captured with another 100 people from our village by our armed neighbors.

When I returned 96 days later I couldn't find anyone from my family," Akansoy said. He lost his mother, two sisters, two brothers and around 30 relatives in the August 15 incident. He remembered his mother's curly hair and hazel eyes: "She was 36 years old – a typical village woman who dedicated her life to her children … I always felt the absence of a mother in a period when we could have had a beautiful time together. I always felt that pain inside me," he said. 58-year-old Turkish Cypriot Leyla Kıral lost her husband Ahmet Mustafa during the 1974 violence. "He was just 25 years old," she said. "Our marriage started beautifully but it didn't end like that … At the beginning, the dispute was within the Greek population. I remember how the nationalist Greek Cypriot organization EOKA killed Cyprus's communist party AKEL members." "After Turkey's operation on July 20, our Greek Cypriot neighbors from the next village came and captured the men in our village," Kıral said.

"I remember one of them telling my husband to leave his watch and ring. When I asked 'why?' he told me 'there might be thieves.' " Her husband was taken to a school first and then was taken to an unknown location on a bus with around 86 other people. Ahmet's bones were found four decades later and he was buried last year. "I don't forget what I have gone through, but I forgive … I turned my anger and revenge into love and sharing," Kıral said. Mihalis Yangu Savva, 58, a retired museum officer from Nicosia, remembered July 15, 1974 very well, the date of the coup. Describing himself as a communist, Savva posed with his hammer and sickle tattoo and recalled the day: "I was 18 and was serving in the army. I heard my name via megaphone telling me go to the office.

I was told I would be staying in a cell because I [was] a communist … I was tortured – as a result I still have to take medicine." Savva's 22-year-old brother Kostas went missing after he went out to get help for his ailing three-month old baby. His remains were found 39 years later on December 8, 2013. "What we found were some bones," Savva said, showing a picture of a handful of human remains. "I believe people should be given the chance to live together," he said. However, for some survivors the memories of that period are too raw for forgiveness. Ahmet Asır, 59, lost his mother, six siblings and 40 relatives during the violence. He was a 'mujahid', a member of the Turkish Resistance Organization (TMT), an armed Turkish Cypriot group that fought the Greek Cypriot EOKA militia during 1974.

Today Asır is the chairman of an association to remember the martyrs of Muratağa, Atlılar and Sandallar. "My father and I are alive because he was taken hostage and I was a mujahid," he said. "If we were in our village we would have been killed too." Asır remains a strong supporter of the Turkish intervention: "If the Turkish army didn't carry out an operation on the morning of July 20, there would not be any Turkish Cypriots left on the island," he said. In April 2004 Asır, unlike most other Turkish Cypriots, voted against a plan by former U.N. Secretary General Kofi Annan that proposed the reunification of the island. Although Turkish Cyprus voted for the peace deal, it was rejected by 76 percent of Greek Cypriots in a separate ballot. "I believe Turkish and Greek Cypriots can live side-by-side after all these years, but cannot live together," Asır said. "Today the murderer of my mother and my siblings is free in Europe," he added.

As Cyprus tries to move on from its bloody past, one group called Together We Can was founded after Uludağ's reports and brought together Turkish and Greek Cypriot families for the first time since the war. They visited schools in villages on both sides and told their stories: "Our aim was to turn down victimization," Uludağ said, adding, "There is only human pain – there is no such thing as Turkish pain or Greek pain."
RELATED TOPICS