Turkey cooperates with other governments to end Israeli aggression 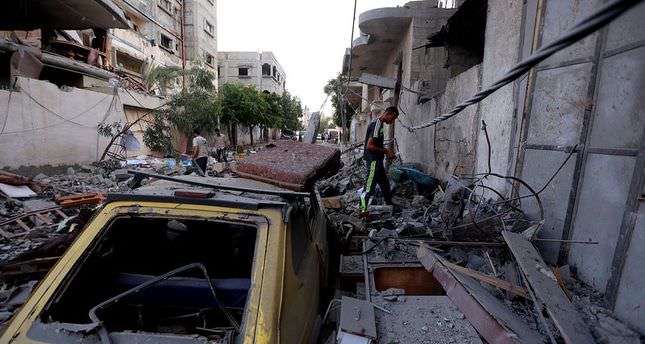 by Daily Sabah Jul 16, 2014 12:00 am
Turkey is closely working with leaders of Qatar, Tunisia and France to put an immediate end to Israeli aggression in the Gaza Strip according to Rashid al-Ghannushi, the leader of En-Nahda Movement which is the largest party in Tunisia.

"Tunisia is mediating – along with Turkey, Qatar and France – in an effort to halt Israel's aggression on the Gaza Strip at a time when the Egyptian regime is not fit to mediate," Ghannushi said at a press conference on Tuesday. The statements came as a result of the deaths of over 200 Palestinians most of whom were women and children who were killed since last week, while 1400 have been injured due to Israeli airstrikes. Israel, on the other hand argues the attacks are an offensive measure allegedly aiming to halt rockets fired at Israel from the Gaza Strip even though there are no Israeli casualties. Ghannushi has expressed En-Nahda is in favor of Palestinian liberation and unity and that they support the cause.

A ceasefire proposal initiated by Egypt between Israel and Gaza was accepted by Israel's security cabinet while Moussa Abu Marzouq, the deputy leader of Hamas has said his faction was still debating the proposal. However, the Egyptian effort has largely failed as Israel has intensified its attacks and continues to target civilians in the Gaza Strip.

According to Haaretz, Tony Blair has urged Egyptian President Abdel-Fattah al-Sissi to encourage a ceasefire between Israel and Gaza while U.S. Secretary of State John Kerry and German Foreign Minister Frank-Walter Steinmeier met with Netanyahu on Tuesday in Tel Aviv and had a phone conversation with the foreign ministers of Egypt, Qatar and Turkey, asking them to increase the pressure on Hamas.

Turkish officials, on the other hand are currently in the process of discussing the matter with leaders of France, Tunisia and Qatar to halt violence. Moreover, the Palestinian Head of State Mahmoud Abbas was expected to meet Turkish officials on late Thursday, while Khaled Mashaal, the political leader of Hamas is expected to come to Turkey on Friday.