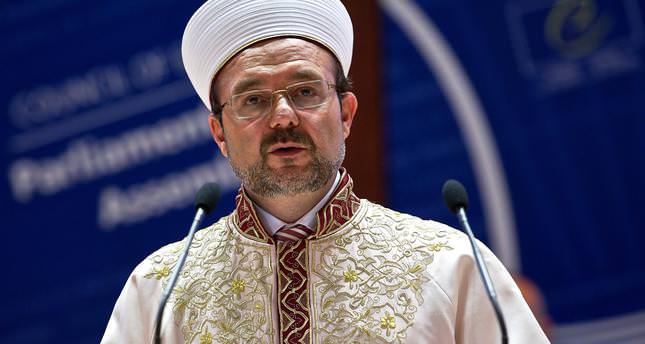 by Daily Sabah Jul 16, 2014 12:00 am
Turkish Directorate of Religious Affairs head Mehmet Görmez on Monday condemned sectarian clashes in the region and said that Turkey should never lose its role as arbitrator over regional issues. "There are certain issues that Turkey should be careful about. First, we [Turkey] should never lose our arbitrator stance. Ahl al-Sunnah tradition constitutes the main population, but never has the luxury to be biased in Sunni-Shiite dilemma. Turkey should always take the role of arbitrator since the only country that people [Muslim people] pin their hopes on is Turkey."

Addressing journalists and media representatives at an iftar event, Görmez on Monday touched on regional issues and ongoing sectarian clashes.
While stressing that these issues should not be interpreted from the perspective of sectarianism alone, he said there are many other political, social, economic and philosophical reasons behind the regional tension. Görmez who said Turkey is a significant country in the region, stated that Turkey's biggest asset is that it has already solved many problems related to religious services and religious education, but other Muslim countries that have been dealing with violence have not managed to solve such issues.

Görmez said that violence which has been interpreted as "sectarian clashes" by the world over the last 10 years saw Muslims become more divided. "The world has some problems with reading these issues [violence in the region]. The world has some problems with understanding how a Muslim can not kill another Muslim in the holy month of Ramadan saying Allahu akbar. It is impossible for our [Turkish] children and youth to understand this issue." Görmez added that it would be wrong to assume that sectarianism is primarily behind violence across the region but rather is a result of occupation, colonialism and tyrannical regimes which have cast a shadow over the region.

Amid sectarian clashes and bloodshed in the region, the Turkish Directorate of Regional Affairs is seeking to host a conference for Islamic scholars in Istanbul on Thursday to stand against extremism and violence. Titled, "World Islamic Scholars Peace, Moderation and Commonsense Initiative," the conference will be attended by Islamic scholars from 32 different countries, including Palestine, Japan, Russia and Somalia.

While promoting an initiative calling on the Islamic world to end bloodshed and chaos in the region, especially during the holy month of Ramadan, the Turkish Directorate of Regional Affairs said in a written statement that condemning the clashes in Iraq and Syria is not enough. The statement reads that Islamic scholars and Muslim wise men should immediately work to bring an end to violence in the region.

The conference will be held from July 17 to July 19 and Turkish President Abdullah Gül, Prime Minister Recep Tayyip Erdoğan and Foreign Minister Ahmet Davutoğlu are expected to attend. The Middle East has been dragged into a sectarian chaos after Islamic State of Iraq and al-Sham captured several cities in Iraq and started murdering the people who are members of different sects, including Shias and some Sunnis. Prime Minister Recep Tayyip Erdoğan also stressed the importance of remaining neutral and not being in favor of any kind of sectarian dispute.
Last Update: Jul 16, 2014 11:41 am
RELATED TOPICS