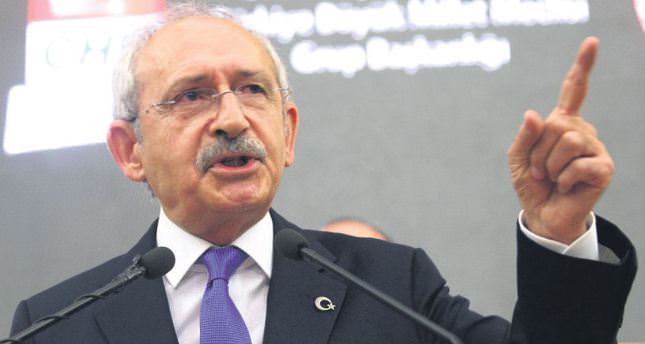 by Daily Sabah Jul 17, 2014 12:00 am
The Republican People's Party (CHP) Central Administration Board convened yesterday under the chairmanship of CHP leader Kemal Kılıçdaroğlu. During the meeting, CHP Vice Chairman and spokesman Haluk Koç denounced Turkey's foreign policy and asked members to support the CHP and Nationalist Movement Party's (MHP) joint presidential candidate and former head of the Organization of Islamic Cooperation Eklemeddin İhsanoğlu, saying he will foster a better democracy.

On Monday, Kılıçdaroğlu convened with former CHP members amid criticism that İhsanoğlu does not represent the CHP's political interests. Kılıçdaroğlu's harsh rhetoric concerning the upcoming presidential election dominated the meeting. Kılıçdaroğlu said in his speech, "If you want to live freely, take a holiday freely, if you do not want anyone to intervene in your life, you have to go to the ballot box and vote for Ekmeleddin İhsanoğlu as a matter of democracy." Kılıçdaroğlu was accused by Turkish Prime Minister Recep Tayyip Erdoğan of adopting a rude and harsh stance against CHP voters and giving orders to the CHP grassroots.

Also, Erdoğan accused Kılıçdaroğlu of imposing a candidate that has a different viewpoint to that of CHP supporters. While the conflict within the CHP started with the failure of the March 30 local elections, the quarrel reached a new level of intensity with the announcement of İhsanoğlu as a joint candidate. It is alleged that Kılıçdaroğlu may lose his post if İhsanoğlu does not win the presidential seat on Aug. 10 election.

However, analysts have said that if a second round of the presidential race is needed between Erdoğan and İhsanoğlu, it will be considered as a success by the CHP and Kılıçdaroğlu will have a chance to protect his own seat. Should Sarıgül not take the leadership of the CHP, he will either set up his own party or will form the Center Party.

Last month, Sarıgül held a meeting with the regional representatives of the Movement for Change in Turkey (TDH), which was established under the leadership of Sarıgül in 2009. It was alleged that TDH Central Anatolia representative Erol Erdem said, "TDH pressed Sarıgül to set up his own party and it seems that in September or October, we [TDH] will establish our own party. We bought our party headquarters in 2010 and institutionalized in cities and districts. When we were ready to set up our own party, Kılıçdaroğlu became the leader of the CHP and we gave a chance to Kılıçdaroğlu, but they did not even appreciate it. When Sarıgül's Istanbul mayoral candidacy was announced, TDH supported him fully, but certain CHP members worked against Sarıgül's candidacy."

After the announcement of İhsanoğlu as a joint candidate, some CHP members and organizations spoke out against İhsanoğlu's candidacy and declared that they would not vote for him. Last month, CHP Deputy Chairman and Yalova Deputy Muharrem İnce spoke about the choice for the joint candidacy. İnce stated that his opinion on a joint candidate was not sought before the nomination process and added that he reproached Kılıçdaroğlu for this issue. The chairman of the Alevi Union of Europe (AABK), Turgut Öker said in a meeting that Alevis will not support the joint candidate. Öker said, "In the final part of our meeting, I clearly told the CHP that we expected them to take bolder steps, to let go of its reserved nature and to adopt a more leftist, democratic and revolutionary attitude."