Bipartisan support for Cyprus reunification in US capitol 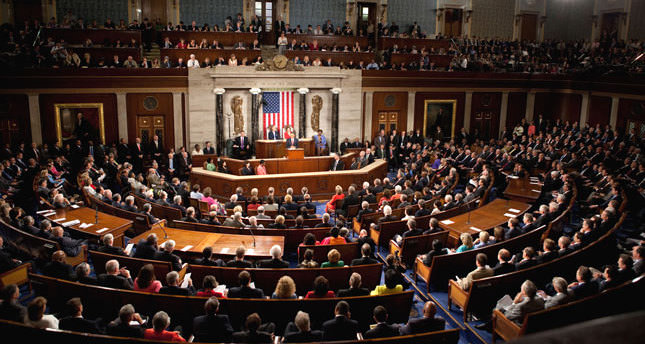 by Ragıp Soylu Jul 18, 2014 12:00 am
Leaders in the U.S. congress and Obama administration have put their differences aside and adopted a common stance on the reunification of Cyprus. U.S. Sen. Robert Menendez, the leading democrat and chairman of the Senate Foreign Relations Committee, and U.S. Rep. Ed Royce, a republican and chairman of the House Foreign Affairs Committee, wrote a letter to President Obama on Tuesday urging his administration to focus its efforts on the goal of reunifying Cyprus.

The letter was penned by the congressmen on the 40th anniversary of Turkey's 1974 month-long military operation to protect the Turkish population in violence-hit Cyprus, which remains partitioned into Greek and Turkish zones. "As Vice President Biden stated during his recent visit in Cyprus…it's long past time - 40 years - that all Cypriots are reunited in a bizonal, bicommunal federation. Reunification would allow Cyprus to fully realize its potential as a stable and predictable democracy and a regional leader anchored in the Western security architecture that is capable of bolstering European energy security," congressional leaders said in the letter.

Leaders stressed the importance of sincere negotiations between the island's communities and referred to the U.S.'s role in supporting the process as "critical." "It is also clear that reunification is not possible without Turkey's support. Turkey must engage in a meaningful and constructive dialogue to address core issues such as the full and permanent withdrawal of its military forces, territorial adjustments, property issues and settlers," they said.

Similar comments were made by John R. Bass, the nominee for the U.S.' next ambassador to Turkey, during testimony in the Senate Foreign Relations Committee. Bass said that instability along Turkey's southern border gives renewed urgency for Turkey to build a stronger relationship with Cyprus and vowed to help the parties achieve their goal. "The United States remains committed to supporting the U.N.-led effort to reunify the island as a bizonal, bicommunal federation. After four decades of division, there is a real chance for a lasting settlement that would bring positive benefits to the entire eastern Mediterranean," he added.

Biden last week reaffirmed the U.S.' strong support for a settlement to reunify Cyprus as a bizonal, bicommunal federation with political equality in his phone call with President Anastasiades. The U.S. believes unification of the island will strengthen the security of its crucial ally Israel and secure natural resources around the island which can help both energy-hungry Turkey's needs and EU states. Unification also is an important element in American politics due to upcoming mid-term elections and the sizeable population of Greek-Americans, who wield influence in the U.S. capital
through numerous lobbying groups.
RELATED TOPICS