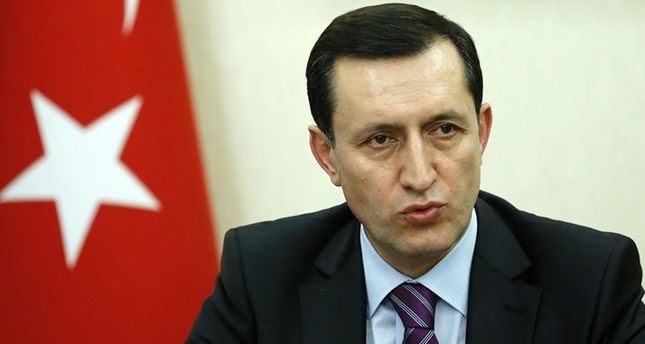 by Daily Sabah Jul 18, 2014 12:00 am
Deputy Prime Minister Emrullah İşler has described Israel's attacks on Gaza as "state terrorism" while reiterating Turkey's support for the Palestinians. "The Turkish Cooperation and Coordination Agency (TİKA) prepared 15,000 humanitarian aid packages for Gaza. As of Monday, 3,000 packages will be delivered to families for each day," said İşler, vowing that Turkey will continue to relief the pain of Palestinian people.

Speaking to the Anadolu Agency (AA), İşler condemned Israeli attacks on Gaza and stated that these attacks have been continuing over the past years at various intervals. "There are cruel attacks and disproportionate force [in Israel's attack] with simple reasons."

İşler criticized the international community for its failure to stop Israel's attacks on Gaza and its silence over the attacks. "Most of those who lost their lives are women and children.

When a Muslim Palestinian dies, the entire world remains silent. That is why Israel continues its massacres and violence with support from the West.
Palestinians had to leave their homes and there are scores of casualties. There are food and medicine needs. For years, Gaza has been under blockade. The entrance doors to Gaza are closed. And now, neither food nor other humanitarian aids can get through those doors."

Highlighting that Turkey lends a helping hand to Gaza under the instruction of the Turkish Prime Minister and Justice and Development Party (AK Party) presidential candidate Recep Tayyip Erdoğan, İşler stated that Turkey's humanitarian aid packages are firstly delivered to families who had to leave their homes. He added that there are deficiencies for nearly 200 medical stuffs and Turkey helps to find these medicines and deliver them to those in need.

Also, İşler noted that certain nongovernmental organizations provide assistance to Gaza, but delivering the aid is problematic due to the blockade. "We [Turkey] took action quickly because TİKA's coordination and personnel is in Gaza and Turkey has sided with Palestinian sisters and brothers during these hard days."

İşler reiterated that Turkey had three conditions to normalize the relations with Israel after the Israeli attack on the Mavi Marmara flotilla in 2010 when nine Turkish citizens were killed by Israeli soldiers on the civilian flotilla, carrying humanitarian aid to Gaza in international waters. "The first of these conditions was an apology. The second one is compensation and we had an advance about it. The last one is to lift the Israeli blockade on Gaza. This is also the most significant indicator of our [Turkey] human-based foreign policy," added İşler.
Last Update: Jul 18, 2014 12:19 pm
RELATED TOPICS