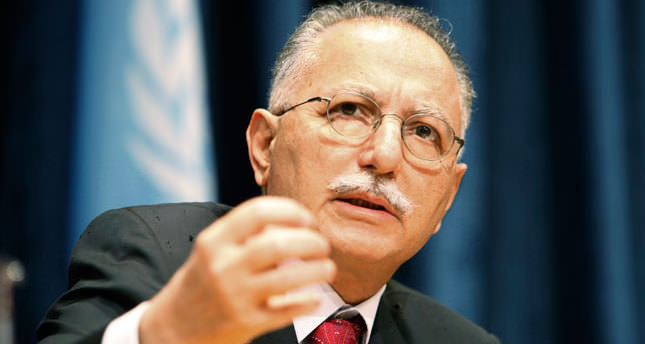 by Daily Sabah Jul 19, 2014 12:00 am
Kemal Kılıçdaroğlu, the leader of the Republican People's Party (CHP), has changed tone following an aggressive speech he delivered earlier this week, when he stated that Turkish voters on vacation are obliged to go to the ballot box on Aug.10 to elect Turkey's president. On Thursday, he attended an iftar organized by the Büyükçekmece municipality and embraced a softer tone. The opposition leader stated that it is necessary to practice politics ethically, adding, "You will make me very happy if you vote taking this into consideration. This is my only demand of you."

These remarks significantly differed from his speech on Monday when Kılıçdaroğlu said, "If you want to live freely, go on vacation freely and if you do not want anyone to intervene in your life, you have to go to the ballot box and vote for Ekmeleddin İhsanoğlu. This is not a joke!"

The statement received widespread criticism because Kılıçdaroğlu banged his fist on the table as he spoke, leading many to claim Kılıçdaroğlu was adopting "authoritarian rhetoric." Recent public opinion polls conducted by research companies suggest that 11 percent of the electorate will be on vacation during the presidential elections while 7.7 percent stated they will not interrupt their vacation to go to the ballot box. In a recent opinion poll, 35 percent of CHP and 40 percent of Nationalist Movement Party (MHP) supporters said they do not support İhsanoğlu as the joint presidential candidate of Turkey's two largest opposition parties. After the announcement of İhsanoğlu as a joint candidate, some CHP members and organizations spoke out against İhsanoğlu's candidacy and declared that they would not vote for him. Last month, CHP Deputy Chairman and Yalova Deputy Muharrem İnce spoke about the choice for the joint candidacy. İnce stated that his opinion on a joint candidate was not sought before the nomination process and added that he reproached Kılıçdaroğlu for this issue.

Meanwhile, as part of his presidential campaign, the People's Democratic Party's (HDP) leader and presidential candidate, Selahattin Demirtaş, was in Zurich on Friday.

Addressing a crowd of supporters, Demirtaş in his speech mostly targeted Prime Minister Recep Tayyip Erdoğan and his ruling Justice and Development Party (AK Party). He claimed that Erdoğan has established absolute power but exclaimed that they have the power to abolish this system. "We have to take advantage of the opportunity that lets people to vote for their president" said Demirtaş, who called all European-Turkish voters to vote for him on August 10.

Demirtaş also touched upon the fact that differences will disappear in Turkey as "Sunnis will fight for the rights of Alevis, Turks will fight for the rights of Kurds" and continued by stating that they will establish permanent peace and will become the largest party in Turkey. Furthermore, Ekmeleddin İhsanoğlu, the joint presidential candidate of the opposition claimed that Turkey was becoming more authoritarian and promised that he would fight this if elected. He also stated he would act as a mediator rather than a ruler on political crisis.

According to major public research companies' surveys, Demirtaş will receive about 8 to 10 percent of the public's support for his presidential candidacy and İhsanoğlu is expected to receive about 35 to 40 percent. The most recent polls show that Prime Minister Recep Tayyip Erdoğan will receive above 50 percent in the first round of the election and avoid second round of voting.
RELATED TOPICS