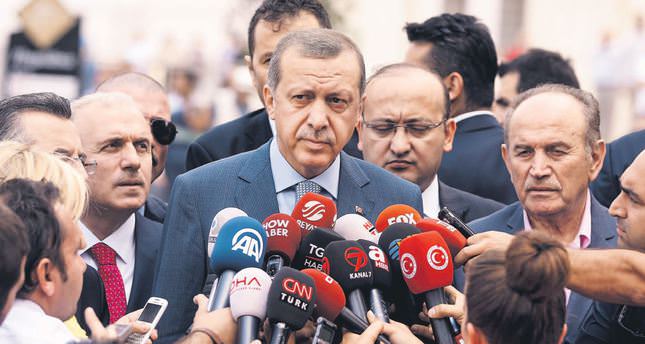 Top state officials, deputies, nongovernmental organizations and the public in Turkey are united in their condemnation of indiscriminate violence perpetrated by Israel against the people of Gaza and are calling on the world to take action

Turkey's role in the international community with respect to the Palestinian issue is praiseworthy, said Palestinian President Mahmoud Abbas in a press conference on Friday. Abbas arrived in Turkey to hold talks with Turkish President Abdullah Gül regarding the 10-day attack by Israel on Gaza. Issuing a press statement at the airport, both the Palestinian and Turkish presidents condemned Israeli aggression and urged for a cease-fire. Abbas said that Palestine sees Turkey as an essential partner on the Israel-Palestine issue. "Just like any other nation in the world, we [Palestine] also want to have an independent state. We face this kind of destruction every other year," said Abbas. Stating that he concurs with Gül's remarks on the Palestinian issue, Abbas said that Palestine and Turkey share the same approaches, visions and interests. In his speech, the Turkish president stated that the main target of Israeli aggression was the reconciliation deal between Fatah and Hamas that was seen by many as essential for Palestinian unity.

Gül strictly stated that a ceasefire is the priority to stop Israeli attacks and prevent Palestinian children from getting murdered. Thanking President Abbas for coming Turkey to discuss the situation, Gül stressed that Turkey will continue to side with the Palestinians. As Turkish key governmental figures, nongovernmental organizations spoke up to stop the Israeli aggression, Thursday night witnessed harsh reactions from parliamentarians and government officials against the Israeli military's ground operation in Gaza while protesters gathered in front of the Israel Embassy to denounce those attacks. According to Israeli Prime Minister Benjamin Netanyahu, the ground operation is the only way to hit Gaza tunnels.

Earlier on Friday, Gül warned Israel of "consequences" if it does not stop its attacks on Gaza's civilian population. The president stated that Israel is planting the seeds of hatred with its aggression, not only in Palestine, but worldwide. "I hold Israel accountable for radicalization. I am calling on the U.N. Security Council to take actions to stop Israel's killings," said Gül.

Vehemently condemning the Israeli attacks, Turkish Prime Minister and Justice and Development Party (AK Party) presidential candidate Recep Tayyip Erdoğan on Friday stated that Israel is a threat to the peace in the world and in the region. Erdoğan called for the Islamic world to take a firm stance against Israel to prevent Israeli state terrorism.

Erdoğan said that Israel is terrorizing and carrying out genocide in Gaza. Reiterating that Turkey had three conditions to normalize the relations with Israel after the Israeli attack on the Mavi Marmara flotilla in 2010 when nine Turkish citizens were killed by Israeli soldiers on the civilian flotilla carrying humanitarian aid to Gaza in international waters, Erdoğan noted that normalization no longer seems possible. "Israel is a state that knows how to kill children very well. They shot kids on the beaches again in Gaza."

Criticizing el-Sissi's Egypt over its stance toward Israeli attacks in Gaza, Erdoğan accused Egypt of creating an alliance with Israel and closing the doors of humanitarian aids to Gaza. Erdoğan criticized Egypt's proposed "ceasefire" and said that the current administration in Egypt is not legitimate and they tried to legitimize el-Sissi's administration by using ceasefire as a medium. "Egypt is not a side in this issue [Palestine-Israel].
They can be an arbitrator, but they are not a side. The side is Palestine, Gaza [not Egypt.]"

Deputy Prime Minister Emrullah İşler stated that Israel blatantly continued its attack on the Palestinian people. İşler said, "Israel is playing with fire and it is headed for a fall."

Calling on the international community to take action against Israel as soon as possible, İşler said, "We have been witnessing how the international community failed. The U.N. order is also not functional. As Turkey, we criticized the U.N. structure and we will continue to do so." Republican People's Party (CHP) leader Kemal Kılıçdaroğlu called UN Security Council to take action immediately against the Israeli aggression.

Kılıçdaroğlu said, "The responsibility is huge. Women and children are being killed. There is disproportionate force and it is unacceptable. What is necessary to be done first is to ensure the permanent peace. If the permanent peace is ensured, the entire Middle East will be relieved. Scores of AK Party and CHP deputies convened in front of the Israeli Embassy to protest Israel's ground operation in Gaza following the decision of joint declaration to condemn the ground operation.

Speaking on behalf of the Turkish Parliament and addressing the crowd that protested against Israel, AK Party Çorum Deputy and Turkey-
Palestine Parliamentary Friendship Group head Murat Yıldırım stated that children are among the victims in Israeli attacks and there is no time left for being patient in the face of this aggression. Yıldırım said that Turkish people pray for victims in Gaza and vehemently condemn Israeli attacks. CHP Istanbul Deputy Mahmut Tanal said Turkey takes the side of the oppressed Palestinian people and that Turkey is here to relieve the pain of people in Gaza.

AK Party Ardahan deputy and Parliamentary Union of the OIC Member States (PUOICM) Turkey head Orhan Atalay accused Israel of dividing the Middle East and supporting tyrannical regimes in the region. Atalay said, "the world has to respond the Palestinian victims' cries for the sake of justice, freedom and consciousness." "Israeli government has been mocking with the world's consciousness, mind and common sense by saying 'we are killing civilians by mistake.' For more than half a century, 99 percent of those who lost their lives were civilians." Atalay further criticized the U.N.'s stance against the attacks in Gaza and called on the organization to take action against it.
RELATED TOPICS