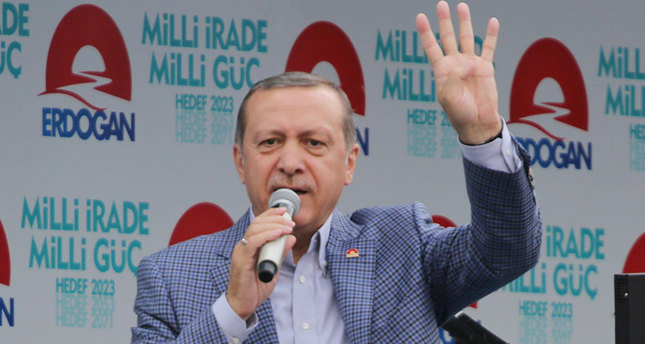 by AA Jul 20, 2014 12:00 am
Turkey's Prime Minister Recep Tayyip Erdoğan has fiercely criticized Israel's offensive in Gaza, comparing it to atrocities carried out by Adolf Hitler during World War Two.

Speaking at a rally in the Black Sea city of Ordu on Saturday, Erdoğan cursed what he said was a racist Israeli mentality that was killing innocent infants and children in Gaza and expanding its brutalities into the West Bank.

Erdoğan said: "Israelis curse and swear about Hitler day and night for the Holocaust, but now the terrorist state of Israel has surpassed Hitler with its barbarism in Gaza.

"Israel aims to break the unity of the Palestinians ... Turkey's anger and disgust is against the oppressor Israel, not the Jewish people."

Erdoğan strongly scorned Israeli MP Ayelet Shaked, who recently said that the blood of all Palestinians should be on their hands and that Palestinian mothers should be killed.

He said such people were not even human beings and had no understanding of piety, or of being a mother.

Erdoğan went on: "Now the Israelis are wearing a T-shirt with an image of a pregnant Muslim woman with the slogan: 'Kill two with one shot,' which shows the hatred and racism these people are bearing in their minds.

At least 339 people have been killed and nearly 2,390 injured in relentless Israeli attacks on the Gaza Strip, according to Palestinian health officials.

Israel has been pounding the Gaza Strip, home to about 1.8 million Palestinians, since 7 July with crippling air and naval bombardments with the ostensible aim of halting rocket fire emanating from the strip.

Israel stepped up its offensive on Thursday night to include ground operations, sending troops into the embattled coastal enclave.