Telecom authority may be merged with spy agency, Erdoğan says 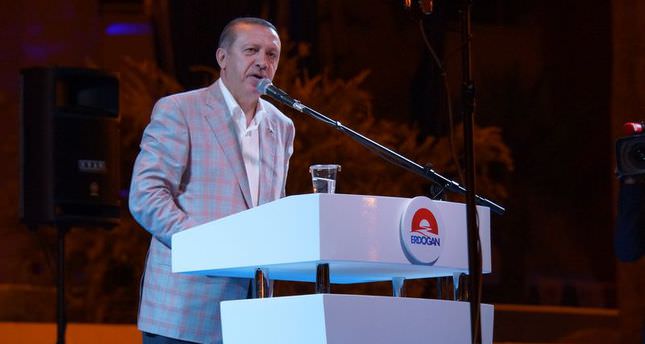 by Daily Sabah Jul 21, 2014 12:00 am
Prime Minister Recep Tayyip Erdoğan on Sunday made remarkable statements about the future of Turkey's Telecommunications Authority (TİB) as he suggested the institution may be facing closure due to its unlawful conduct in cooperation with agents of the Gülen Movement during and following the Dec. 17 operation.

Underlining the necessity to continue working in a determined fashion on two crucial subjects, Erdoğan said one of these is to finalize and resolve the reconciliation process while the other is to clean the Turkish state of agents of the Gülen Movement and any others who aim to infiltrate state institutions. "Other presidential candidates do not have such concerns" said Erdoğan, who said they have not achieved anything in Turkey while harshly criticizing Ekmeleddin İhsanoğlu, the joint opposition candidate for saying "These issues do not concern me." He stated that the legal process was now starting to take place and added that the evidence collected since Dec. 17 Operation has substantiated the claims from 'rumors' to facts.

"We may abolish TİB" Erdoğan said, articulating on the fact that the National Intelligence Organization (MİT) already handles the work of the TİB and added that he is in favor of transferring TİB under the authority of MİT as an institution.

Turkey's telecommunications authority was originally designed by agents of the Gülen Movement according to sources, and it is claimed that the compound was chosen by them while an exclusive system was designed to make sure that the movement's agenda was not revealed through the system. For instance, the latest shuffle in the TİB's presidency did not stop the movement from by-passing the system as they continued to delete wiretapping recordings which had previously been set by an automated system. Currently, the government's main concern is that the opaque nature of the TİB allows agents to infiltrate the institution and exploit its resources to their advantage, something that came to light through the discovery of tens of thousands of wiretappings which were conducted by the Gülen Movement. Therefore the establishment of a transparent and auditable structure is highly emphasized by the government to ensure such unlawful acts do not take place in the future.

Fethullah Gülen, the leader of the Gülen Movement, who lives in self-imposed exile in the U.S. is currently facing an investigation initiated by the Ankara Public Prosecutor for a number of charges including conspiring against the Turkish state and infiltration of state institutions, which could ultimately result in his extradition.

Prime Minister Erdoğan recently requested the extradition of Fethullah Gülen both privately and publicly from the Obama administration and accused Gülen of plotting a judicial coup against the Turkish government before the local elections last March.