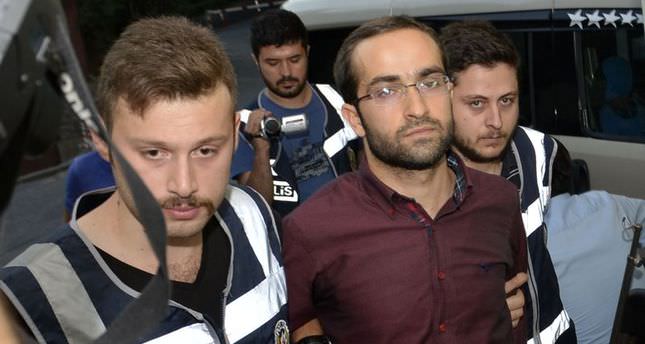 by Daily Sabah Jul 22, 2014 12:00 am
Dozens of Gülen Movement-linked police officers, including department chiefs, were detained in pre-dawn raids conducted on Tuesday for illegally wiretapping thousands of journalists, politicians, academics and other prominent figures.

The operation was carried out in relation to the so called "Tawhid-Salam terrorist organization," a non-existent organization created by officers linked to Fethullah Gülen – a controversial imam living in rural Pennsylvania in self-imposed exile – and used to wiretap thousands of people for supposedly being member of the now-defunc terrorist organization.

In a statement issued Tuesday, Istanbul Chief Prosecutor Hadi Salihoğlu said warrants were issued for a total of 115 police officers and 99 of them had been taken into custody so far. Seventy-six of them are suspected of espionage for illegally wiretapping Erdogan, some government ministers and the Turkish intelligence chief, allegedly listening into conversations they held with foreign dignitaries and recording these conversations, Salihoğlu said. He said the suspects were able to wiretap the Turkish officials by giving them code names and launching a fake probe into a fictitious terrorist gang. Salihoglu also said 39 other officers are suspected of wiretapping legislators, journalists and high-level bureaucrats through falsified documents.

The charges laid for suspects include "forging the content of official documents," "misconduct," "blocking access, manipulating and deleting data from a processing system," "obtaining information pertaining to state security" and "violating the confidentiality of communication." Reports indicated that the main reason behind the arrest order was the wiretapping of thousands of people at the behest of the Gülen Movement.

Speaking during a televised interview on Monday, Prime Minister Recep Tayyip Erdoğan said he is expecting the U.S. to take a stand on Gülen and added that the controversial imam will not be able to reside in the U.S. once an Interpol Red Notice is issued for him.

The Tuesday raid, which was carried out by the Istanbul Counterterrorism Office, started at about 1:30 a.m. in 22 cities including Istanbul, Ankara, Antalya, Elazığ, Van, Zonguldak and Diyarbakır and about 200 different residences were searched. The Counter-Cybercrimes Unit also took part in the operation while the police ordered journalists to leave the premises. The suspects were brought to Haseki Hospital for a health check-up following the search and were taken to the Istanbul Police Headquarters in Vatan while evidence was collected.

Istanbul's Halkalı district was one of the main areas of focus in the operation as it hosts a mass housing complex for police officials. One police officer by the name of Hikmet Kopar was handcuffed as he was taken away. Kopar's lawyer stated that the preamble for his client's arrest was outlined as "an attempt at toppling the government and the Turkish state through arms, forging official documents and more." Yurt Atayün, who is the former director of a counterterrorism unit, was called to give testimony. Prominent figures like Ömer Köse, the director of counterterrorism unit at the time of the Tawhid-Salam case, and his assistants Kazım Aksoy, Ramazan Candan and Gafur Ataç were also detained. Kazım Aksoy was dismissed from his post following the National Intelligence Organization (MİT) crisis on Feb. 7 and was assigned to a different post at the Financial Branch but was removed following the Dec. 17 operation, which was orchestrated by members of the Gülen Movement.

In Antalya, one police officer who works for the Criminal Unit was arrested while four were arrested in Şanlıurfa, in addition to two in Van and a deputy police chief in İzmir. It was reported that the suspects will be sent to Istanbul during the investigation.

Prime Minister and AK Party presidential candidate Recep Tayyip Erdoğan in his last group meeting at the Turkish Grand National Assembly (TBMM) stated that the scope of the operation will be expanded and more people who are involved in the case may be arrested.

Tuesday morning's raids are part of the government's efforts to clean Turkish state institutions of Gülenist agents who are loyal to Fetullah Gülen, who currently lives in the U.S. in self-imposed exile.

His movement operates in hundreds of locations throughout the world via charter schools and other activities, and their activities have been subject to government scrutiny in Azerbaijan, Russia, Germany, U.S. among other countries. They are currently accused of infiltrating Turkish state institutions to establish a "parallel state" which pays allegiance to Gülen. The movement on the other hand denies these claims and has radically changed its political stance since the government proposed closing prep schools in Turkey, which are mostly operated by the Gülen Movement, that is now allied with and supporting the main opposition Republican People's Party (CHP), which previously persecuted revered Islamic scholar Said Nursi, who Gülen claims to base his ideologies on.