Erdoğan: Alevis and Sunnis are each other's only protectors 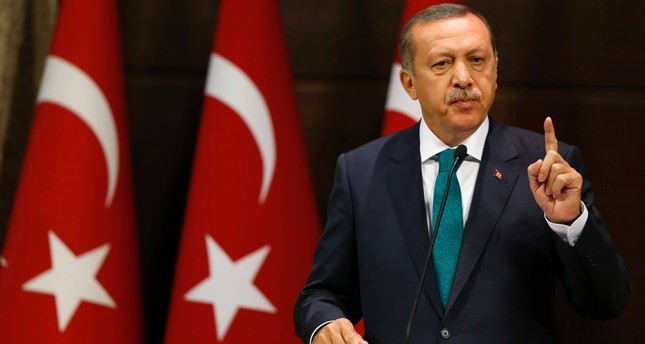 by Daily Sabah Jul 23, 2014 12:00 am
Prime Minister Recep Tayyip Erdoğan met Monday with leaders of the Alevi community, representatives of nongovernmental organizations and academics who specialize in issues concerning the Alevi community at an iftar meal in Ankara. In his speech, Erdoğan drew attention to the fact that in Turkey as well as in the Middle East there are foreign powers who want to start conflicts between Alevis and Sunnis, but he said that fortunately, these efforts have been unsuccessful in Turkey. "Those who want to distinguish Shiite and Sunni and set them against each other in the Middle East also wanted to apply the same plot in Turkey. Thank God it did not work in Turkey and hopefully will not," he said. "We never seek to impose an identity on our Alevi citizens and today we are not seeking it either," he said. Erdoğan said that Alevis and Sunnis were both equally essential elements and architects of the Seljuk and Ottoman Empires and the Republic of Turkey.

''Alevis and Sunnis are each other's only protectors,'' he added. Saying that he was the first prime minister of Turkey to apologize for the Dersim massacre, Erdoğan said never to ignore other ethnic groups. ''When we founded the AK Party 13 years ago, we did not aspire to heal our own wounds, we also aimed to heal the wounds of everybody oppressed in society,'' he said. ''We didn't consider the Dersim incident as a political tool. We questioned it with sincerity,'' he added. Saying that there is a new social and political process continuing for everyone in Turkey, he claimed that the new process will have even more strength after Aug. 10. ''There is no issue that won't be covered, no matter will be postponed'' he said.
İhsan Şahin, one of the leading opinion leaders of the Alevi community and president of the Universal Alevi Bektashi Union, was among the participants of the event.

According to Şahin, the meeting, rather than formal dinner, was more like a workshop, "In the meeting. Prime Minister Erdoğan and Deputy Prime Minister Emrullah İşler shared their view about the new Alevi reform package that is currently under preparation. As representatives of the Alevi community we also expressed our views and government officials took note of our views." In the meeting, government officials and Alevi representatives discussed the new Alevi reform package, which is expected to be announced after the Aug. 10 presidential election. Şahin believes that the governments draft reform package will meet expectations. ''The new reform package brings concrete solutions to the questions of legal status for cemevis [Alevi houses of worship] and social rights for dedes [Alevi religious figures]. Therefore, I can easily say that a draft package was satisfactory.'' he said.

The Alevi issue has been on the AK Party agenda for years and recently the government has taken a series of steps to understand and respond to Alevi identity-based concerns. Popularly known as the "Alevi opening" in 2010, the process is the first systematic effort to rectify the identity- based discontent of the Alevis. The government has been holding meetings with several Alevi associations to listen to their requests and note their proposals.

The key point in the reform package will be the status of cemevis. Currently, cemevis are not officially acknowledged as a place of worship despite persistent demands by the country's Alevi community to officially sanction them. However, the reform package will allow for cemevis to be recognized as places of worship. The reform package will likely also offer Alevi religious figures (dedes) a salary after they are officially certified as a "religious leader." Moreover, the plan aims to get all Alevi and Bektashi associations and foundations affiliated with the Foundation of Hacı Bektaş-ı Veli and suggests establishing a new Deputy Directorate under the Directorate of Religious Affairs (DİB) to work exclusively with Alevi issues.
RELATED TOPICS