PM Erdoğan: We will defend Palestine whatever the cost may be 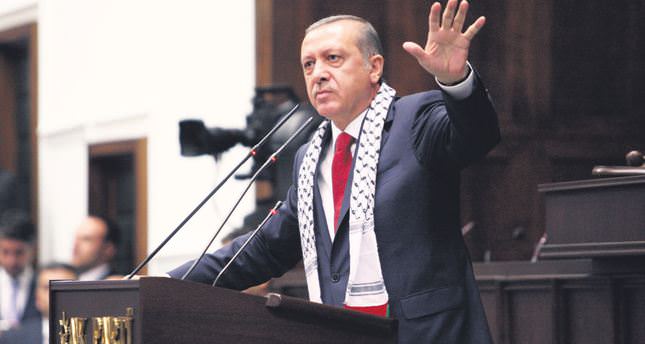 Prime Minister Erdoğan, in his last speech to his parliamentary deputies before the presidential election, praised all who protested against Israeli aggression and said Turkey was on the side of Palestinians.

"Even though governments have remained silent about this inhumane massacre, people have poured to the street [to support Gaza]. I greet respectfully residents in London, Brussels, Paris, Belgrade, Copenhagen, Berlin who stand up for humanity," said Turkish Prime Minister and Justice and Development Party (AK Party) presidential candidate Recep Tayyip Erdoğan at his last group meeting as prime minister yesterday. Erdoğan thanked and congratulated Jordan, Lebanon, South Africa, Chile, Venezuela, Pakistan and all other countries who stand against Israeli aggression in Gaza.

Wearing a Palestinian keffiyeh (scarf) to show his support for Palestinians who have been facing Israeli aggression since July 7, Erdoğan said that Israel massacred Palestinian people with an indifference never before witnessed in history. Reiterating that the death toll in Gaza has reached 600, he said that out of the 600 Palestinian victims, 100 of them were children. Calling on the entire world, he said the countries that have turned a blind eye to Israeli aggression on Gaza or even supported the offensive, lead Israel to persist with its attacks on Palestinians.

He asserted that Egypt's first democratically elected President Mohammed Morsi, who was toppled by a military coup last year headed by the current President and former Defense Minister Abdel-Fattah el-Sissi, was the only country that stood against Israeli aggression toward Gaza during his term of office, but his firm stance against Israel disturbed certain circles. "Democratically-elected Morsi's first activity was to open the Rafah border crossing and take sides with Palestine during his one year in office, but they toppled his government," he said.

Erdoğan asserted that certain circles wanted the same scenario in Egypt to pan out in Turkey to push the country to silence. He said, "No one can set the agenda of Turkey in accord with their own interests anymore. This is a new and independent Turkey." Reiterating that former Turkish Prime Minister Bülent Ecevit, who was prime minister from 1999 to 2002 stood against Israeli aggression toward Gaza and described attacks as "genocide" while he was in office, Erdoğan continued, "Both Israel and other world powers denounced Ecevit and made him apologize four times in two weeks. They still want Turkey to remain silent, but we will not."

He denied the main opposition Republican People's Party (CHP) leader Kemal Kılıçdaroğlu's allegations that Turkey shares information with Israel from the Kürecik early warning radar system in the central Turkish province of Malatya, which is a component of NATO's missile defense system.
Slamming Kılıçdaroğlu, Erdoğan said that the NATO missile defense system and the Kürecik radar was built for Turkey's national security with the aim of protecting people, territories and NATO ally forces.

Also, Turkish diplomatic sources said that this kind of early warning system is technically impossible. Erdoğan said that Turkey is a completely independent country and only the people have the right to shape Turkey's future. He added that Turkey will side with Palestine no matter what happens.

"My desire is to transform Turkey into a presidential system. This system will benefit Turkey," said Turkish Prime Minister and AK Party presidential candidate Recep Tayyip Erdoğan during a televised interview aired on a Haber and Atv.

Erdoğan, speaking ahead of the upcoming presidential election to be held on Aug. 10, which will be the first time in Turkey's history that the president is elected by popular vote, spoke on his campaign pledges and the latest developments in the country. Speaking about his presidential vision document announced on July, 11, Erdoğan stated that the presidential system will hasten the decision making process and be accompanied by a reforms in politics, as well as the executive and judiciary.

Referring to his vision document's three main points, which are building a democratic administration, public prosperity and leadership, Erdoğan criticized the current Turkish Constitution and said that Turkey needs a new national charter, which should be formulated through negotiations and compromise among political parties in the Parliament. The AK Party presidential candidate then echoed his sentiments that if he is elected as the next president of Turkey, a new constitution will be priority for him.

Erdoğan then commented on the AK Party's three-term rule that bars a politician from running for a fourth consecutive term. He said that the reason behind the three-term rule is to prevent politicians from occupying the same seat for years. The prime minister denied allegations that President Abdullah Gül and Erdoğan will apply the Putin-Medvedev model in the country.

Reiterating that the AK Party lowered the minimum required age to be a candidate from 30 to 25, Erdoğan said that he wants to lower the minimum age for being a parliamentarian to 18 to enable leading young Turkish citizens to have a word in politics like in European countries.
RELATED TOPICS