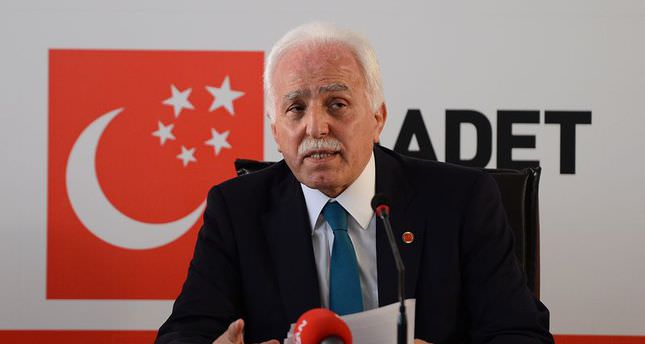 by Anadolu Agency Jul 23, 2014 12:00 am
Leader of Turkey's Felicity Party(SP) Mustafa Kamalak announced that they will not support any of the candidates in the upcoming presidential elections that will be held on August 10.
He said, "This decision was taken after consultations within party members and all party organizations. If the president is not elected in the first round we will reconsider our decision for the second round."
During the upcoming elections, three candidates will run for presidency, the ruling Justice and Development Party (AK Party) leader and current Prime Minister Recep Tayyip Erdogan, the opposition's joint candidate, Ekmeleddin İhsanoğlu and the pro-Kurdish People's Democratic Party(HDP) presidential candidate Selahattin Demirtaş.
Last Update: Aug 01, 2014 9:52 pm
RELATED TOPICS