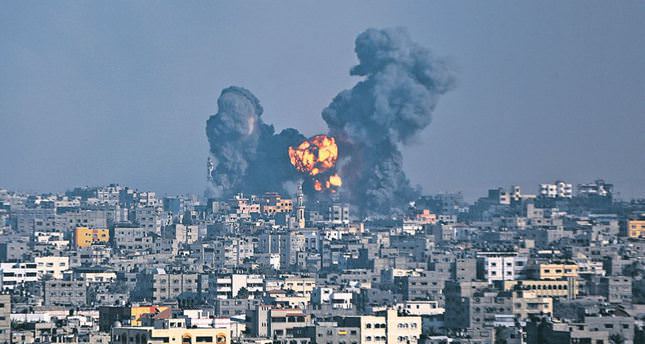 PM Erdoğan and his government after talks with leading figures in international politics, including U.N. head Ban Ki-moon, are trying to make concrete steps to stop Israeli aggression in Gaza and ensure a permanent cease-fire

Turkish Prime Minister Recep Tayyip Erdoğan and U.N. Secretary-General Ban Ki-moon spoke over the phone on Tuesday and discussed ways to end continued Israeli attacks on the blockaded Gaza enclave, attacks which have so far claimed at least 644 Palestinian lives.

Since July 7, Israel has been launching continuous air strikes on the Gaza Strip with the ostensive aim of halting rocket fire. Gazabased resistance factions have continued to fire rockets at Israeli cities in response to the Israeli bombardment.

During the phone conversation, Ban said the U.N. attaches great importance to Turkish efforts to negotiate a ceasefire between Israel and the Palestinian resistance faction Hamas. Erdoğan, emphasizing that no military solution would be viable in the Israel-Palestine dispute, said initiatives for a permanent peace deal between Israel and factions in Gaza should be finalized.

Halit Çevik, the Turkish ambassador to the U.N., condemned Israeli violence during a meeting of the U.N. Security Council, saying the council should fulfill its responsibility to stop the violence and launch a humanitarian aid campaign in the region.

A draft proposal for a truce and a lifting of the Israeli embargo on Gaza is expected to be distributed in the council Wednesday by Jordan, one of the
non-permanent members of the council. Çevik said Turkey supports Palestine's right to be a U.N. member state and to participate in other international organizations.

Palestine applied for U.N. membership in 2012, but the appeal has not yet been put on the agenda of the council, the final decision-making body.
Furthermore, Qatari Foreign Ministry Khalid bin Mohamed Al-Attiyah and his Turkish counterpart Ahmet Davutoğlu discussed the latest developments in the Palestinian enclave as well as efforts aiming to reach a ceasefire between Israel and the Palestinian groups in Gaza, Qatar's official QNA news agency reported early Wednesday.

Tuesday's phone conversation was the second between the two officials within 24 hours and the third in five days.

At least 644 Palestinians have been killed, mostly civilians, and more than 4,040 others injured in Israel's ongoing offensive, now in its third week.
According to official Israeli figures, 28 Israeli soldiers and two civilians have been killed since hostilities began. Back in 2008/9, over 1,500 Palestinians were killed in Israel's three-week-long "Operation Cast Lead."

Turkey on Monday declared three days of national mourning, for the Palestinian victims of Israel's military operation in the Gaza Strip, denouncing the assault as a "massacre." "We condemn Israel's massacre of the Palestinian people," Deputy Prime Minister Bülent Arınç told reporters in Ankara in televised comments after a cabinet meeting. "In a show of solidarity with the Palestinian people, three days of mourning have been declared starting from tomorrow Tuesday," Arınç added.
Last Update: Jul 24, 2014 4:30 pm
RELATED TOPICS