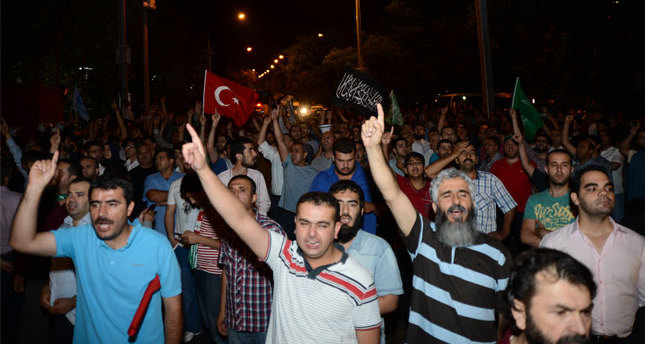 by Daily Sabah with Agencies Jul 24, 2014 12:00 am
The latest call urging Israel to stop its "disproportionate use of force" and "massacre" of Palestinians in the Gaza Strip came from the rectors of Turkey's universities, who "vigorously" condemned the "great tragedy of humanity" in Gaza. The heads of 111 universities around the country issued a joint statement on Wednesday in 11 languages, accusing the world of being "deaf and blind" to the plight of civilians in the Palestinian enclave.
Since Israel launched its military operation, 644 Palestinians have been killed, including 164 children, 79 women and 35 elderly, according to the Ministry of Health. The Israelis have lost 31, including two civilians.

In the statement, they said, "In Ramadan, the holy month of [the] Islamic world, people are having their iftar [fastbreaking evening] meal through the bombs with tears, grief and sorrow." "Unfortunately, everyone who closes their eyes to these cruel people and this kind of cruelty [shares in] that violence."

They called on the U.N. to impose sanctions on Israel, accusing the body, as well as the U.S., EU and Arab governments, of supporting Israel and fuelling aggression. The statement added, "Although [the] U.N. has dozens of decisions [concerning the] Israeli government, it is extremely thought-provoking that [the] U.N. does not have any sanctions on [the] Israeli government." The rectors announced they will build public opinion against the "massacre," fund aid campaigns in all universities, sue Israel for compensation for casualties and press for those responsible to be punished.

The U.S.-based website electronicintifada.net, which has been reporting on the July 17 Israeli offensive, published an open letter to Israeli academics written by Haim Bresheeth, a film scholar at the School of Oriental and African Studies (SOAS), University of London, urging them to take action against the Israeli state's aggression. "We invite you, as fellow academics and intellectuals, to join our voices in an open and resounding protest against these war crimes by the Israeli government, your government. We urge you to stand up and be counted, to answer the call of your Gazan colleagues and make your voice heard," the open letter implored.

The letter attracted nearly 1,000 signatures from academics all over the world, including those in Israel. The website reported that three dozen Israeli academics responded to this call and issued a statement regarding the Israel-Palestine issue.

At least 644 Palestinians have been killed, mostly civilians, and more than 4,040 others have been injured in Israel's ongoing offensive, now in its third week.

According to official Israeli figures, 28 Israeli soldiers and two civilians have been killed since hostilities first broke out. Turkey on Monday declared three days of national mourning for the Palestinian victims of Israel's military operationin the Gaza Strip, denouncing the assault as a "massacre."
RELATED TOPICS