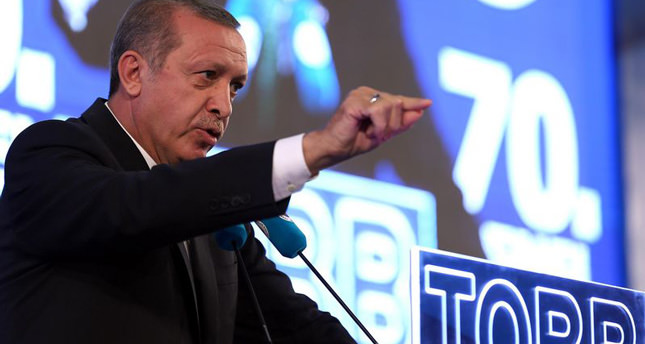 While returning from his Mersin rally on Thursday, Prime Minister Recep Tayyip Erdoğan travelled back to Ankara with Daily Sabah columnist Yahya Bostan, telling him that the Gülen Movement will pay the price for its illegal activities and he will never pardon members of this orginization

Prime Minister Recep Tayyip Erdoğan says the government will not pardon members of the Gülen Movement, which is accused of infiltrating Turkish state institutions and using unlawful actions to damage the nation-state.

In response to Deputy Prime Minister Bülent Arınç's remarks, where he said that members of the Gülen Movement may be pardoned if they sought forgiveness, Erdoğan said that they do not have such a prerogative at the moment while legal procedures take care of the process. He also noted that an underestimation of the issue may result in further problems in the future.

"I do not know what Mr. Arınç based his statements on, but I personally will not let it happen as long as I am in power," said Erdoğan, who said that the Gülen Movement has victimized countless numbers of innocent people and should be held accountable for what they have done.

Highlighting the fact that thousands of people have unlawfully been wiretapped by agents of the Gülen Movement, who worked within the security forces and Turkey's Telecommunications Authority (TİB), Erdoğan urged that all measures should be taken to stop such incidents reoccurring in the future. He claimed that interfering in people's private lives was against Turkish values and customs while stating that the government regrets establishing the TİB.

"We must abolish the TİB" said Erdoğan, who stated that the institution was "occupied" by the Gülen Movement and does not serve an exclusive purpose as the National Intelligence Organization (MİT) has the capacity to take care of what has been previously handled by the TIB. "I am in favor of completely abolishing the TİB and putting an end to unlawful wiretapping," said Erdoğan, who added that the Gülen Movement has significantly exploited their position in the TİB, wiretapping people through the use of bugging devices placed in their houses, bedrooms and offices. In response to a question about whether the abolition of wiretappings would pose a national security threat, Erdoğan said that it would not threaten security as "the MİT is able to take care of such issues whereas the TİB used to conduct wiretappings based on orders from the movement."

Erdoğan also touched upon the fact that the recent operations conducted against Gülenist police officers has opened a new chapter and will allow numerous hidden cases to be revealed. He noted that supporters of the Gülen Movement specifically target and oppose national projects which will develop Turkey and contribute to its future. For instance, the third bridge along the Bosphorus, the Canal Istanbul project and the high-speed train projects have all been targeted while the defense industry consistently faces obstruction. "If the Turkish nation deems me worthy of becoming the president, I will continue my struggle with the same determination from the moment I become president," said Erdoğan, who signaled that provocations and intimidation will not stop the government from pursuing its projects.

Over 100 Gülenist police officers have been arrested as part of the wiretapping investigation in an effort to cleasne Turkish state institutions. Out of the detained officers, 22 have been sent to the courthouse and 14 of the 22 face detention charges while eight of them have been released. According to Turkish media outlets, police officers who tried to make a scene when they were handcuffed had received special instructions from Abdüllatif Tapkan, the movement's "imam" within the police force, installed to create the impression that the police officers are innocent and are being victimized. Likewise, all officers who were arrested have adopted the same rhetoric as they claimed "the thieves are free while we're being arrested." It was also reported that one of the officers had requested to be handcuffed from the back to make himself look like a victim. At the same time, the Gülen Movement has started a social media campaign distributing handcuffed pictures of their agents while posting provocative messages.

According to reports, officers affiliated with the movement wiretapped and issued arrest warrants for 251 people, including Prime Minister Recep Tayyip Erdoğan, Daily Sabah's Editor-in-Chief Serdar Karagöz and Daily Sabah's Ankara correspondent Ali Ünal, for being members of the "Tawhid-Salam" terrorist organization. The prosecutors' office previously ruled there was a "lack of grounds for legal action" and dismissed the charges against the 251 people.

Furthermore, in a seperate investigation that started in April, six police officers in Adana -- including two police chiefs and a retired officer -- were dismissed from their profession on Friday afternoon.

Media reports state that Gülenist prosecutors and judges who were involved in illegal activities, including coup attempts against the elected government on Dec. 17 and 25, will be the first target of the upcoming operations.

In his first reaction to the raids, Erdoğan hinted that the probe into the Gülen movement will widen. "We are currently watching. We will all see what will come out of this," he told reporters at the Turkish Parliament. Asked if the drive to purge Gülenists from the state apparatus will be expanded, he replied "It looks like it will, of course, of course." In a television interview on Monday, Erdoğan vowed that the fight against the Gülen Movement would continue "nonstop" while calling on the U.S. to extradite the self-exiled imam. "I expect the U.S. to take a stance on the Gülen issue," Erdoğan said.