Government pledges to ensure the safety of Jewish community in Turkey 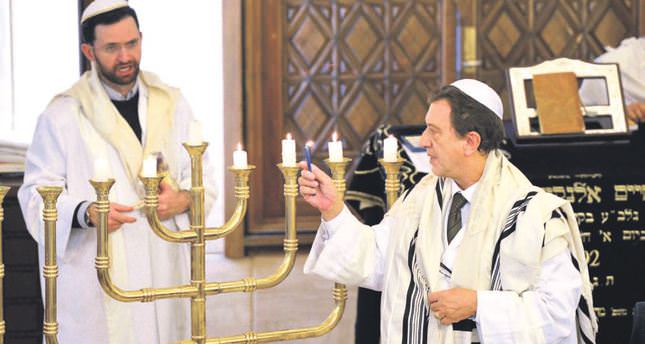 Dismissing Israel's allegations that his remarks are anti- Semitic, Turkish PM Erdoğan pledged to ensure the safety of the Jewish people in Turkey and urged Jewish leaders to speak out against the Israeli massacre in Gaza

"Jews in Turkey are our citizens. We [Turkish government] are responsible for their security of life and property," Turkish Prime Minister Recep Tayyip Erdoğan said on Thursday in an interview with Daily Sabah columnist Yahya Bostan.

Following Israeli aggression in Gaza, dozens of protests mushroomed across Turkey to speak out against Israeli aggression, which aroused speculations over the situation of Jews residing in Turkey. "I talked with our Jewish citizens' leaders on Thursday and I stated that they should adopt a firm stance and release a statement against the Israeli government. I will contact them [Jewish leaders in Turkey] again, but whether or not they release a statement, we will never let Jewish people in Turkey get hurt," added Erdoğan.

The prime minister said Jewish leaders in Turkey should speak out against Israeli aggression and that the Israeli administration abuses all Jewish people around the world for its fraudulent policies.

Erdoğan said that Turkey took the U.N. initiative to have the Israeli administration be tried in international courts. He added, "This initiative of Turkey is one of the moves that bothers Israel since there is an alliance on the Israel's possible trial. We [Turkish government] will follow this [Palestine-Israel] issue closely."

On Friday, Erdoğan attended the opening ceremony of Ankara-Istanbul high-speed railway line where he criticized the U.N. for remaining silent on Israeli aggression: "The U.N. is silent on Israel's barbarian massacre of Gazans and even supports Israel's arrogance."

He said that Turkey has some problems with delivering humanitarian aid to Gaza because the Israeli administration has been trying to hinder the process.

Speaking in a televised interview on CNN, Erdoğan on Thursday said that Israel is a "terror state" and its operations in Gaza are creating a "wave of terror."

He highlighted that Turkey is only delivering humanitarian aid to the people of Gaza. "Qatar's cooperation with Turkey has always been on the side of the persecuted, to support them with humanitarian aid. This is what's being done," he said. He also said, "If Israel is sincere on establishing a cease-fire, we [Turkey] will convince Hamas [to do the same]."

He said that Turkey is a member state of NATO and added, "We are a country that acts within the framework together with our partners in NATO. We have an international identity, a character. We never got involved in terrorism - we have always fought against terrorism."

In his political rally in Turkey's southern city of Mersin, Erdoğan on Thursday said that as Israel continues to viciously shell Gaza, the entire world, including Muslim countries, turn a blind eye to this Israeli massacre: "The world's nations stand against this [Israeli massacre] now. Certain governments do not allow protests and yet they claim that they are democratic and liberal."

Erdoğan said that Turkey has lent a helping hand to all nations and countries that are in need of help during the Justice and Development Party's (AK Party) 12 years in power.

He said that the Turkish Presidency of Emergency and Disaster (TİKA), the Directorate of Religious Affairs and prime ministry do their best to help the people of Gaza and all others oppressed around the world. He said, "No one can set the agenda of Turkey in accord with their own interests anymore. This is a new and independent Turkey."

Reiterating that former Turkish Prime Minister Bülent Ecevit, who was prime minister from 1999 to 2002, stood against Israeli aggression toward Gaza and described the attacks as "genocide" during his tenure, Erdoğan continued, "Both Israel and other world powers denounced Ecevit and made him apologize four times in two weeks.

They still want Turkey to remain silent, but we will not comply." Also, Erdoğan pledged that even though the entire world prefers to keep silent on the Israeli aggression, Turkey will not stop to stand against this aggression and cruelty. Erdoğan concluded by saying, "Humanity does not see the massacre and casualties in Palestine. Hundreds of people lost their lives, but still nobody is raising their voices around the world against Israeli aggression. Only Turkey, Qatar and South America raised their voices. If Israel continues to terrorize, it will eventually be tried in international courts. We will witness it. We, as Turkey, will fight for it. Do not forget to pray for Palestine. Do not forget to pray for the victims in Gaza, Syria and the Turkmens in Iraq."
Last Update: Jul 26, 2014 12:00 pm
RELATED TOPICS