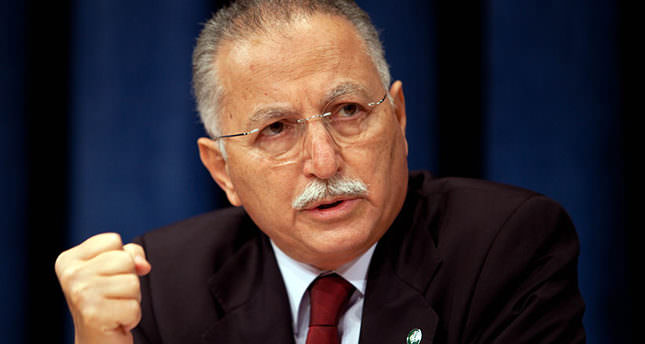 by Daily Sabah Jul 26, 2014 12:00 am
"I will be elected as president with a 60 percent of the vote," asserted Ekmeleddin İhsanoğlu, the Republican People's Party (CHP) and Nationalist Movement Party (MHP) joint presidential candidate and former head of Organization of Islamic Cooperation (OIC), during a campaign speech on Thursday.

Turkish citizens are holding their breath ahead of Turkey's first-ever popular presidential election on Aug. 10. The candidates, including Turkish Prime Minister and AK Party presidential candidate Recep Tayyip Erdoğan, İhsanoğlu and pro-Kurdish People's Democratic Party (HDP) candidate Selahattin Demirtaş, a popular political figure among Kurdish people, are now speeding up their electoral campaigns. Praising the CHP and MHP, İhsanoğlu stated that the two opposition parties had reached a landmark compromise by announcing him as the joint candidate.

Also, İhsanoğlu described his nomination as a significant change in the country which will ensure peace. İhsanoğlu added that politicians conduct politics based on religion, sect and race in Turkey today, but there has been no discrimination in Turkey's history before.

While İhsanoğlu continued his electoral campaign, some CHP members have spoken out against İhsanoğlu's candidacy. On Friday, CHP Adana Deputy and Turkish Grand National Assembly (TBMM) Industry, Trade and Energy Commission member Ümit Özgümüş accused İhsanoğlu of being sectarian, a bigot and discriminatory. Referring to İhsanoğlu's remarks in a televised interview on July 22 when the joint candidate said Turkish Alevis are completely different from Alawites in Syria, Özgümüş stated that İhsanoğlu has a discriminatory stance toward Alawites and had offended nearly 1 million Alawite people residing in Turkey.

Meanwhile, the CHP has formed a team to carry out İhsanoğlu's social media campaign ahead of the presidential election. The team is comprised of 70 members and numerous volunteers who will work on reaching out to voters to inform them of İhsanoğlu's campaign pledges.
Last Update: Aug 01, 2014 9:50 pm
RELATED TOPICS