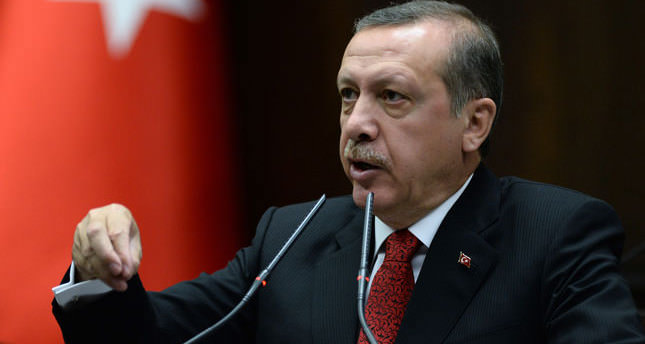 by Daily Sabah Jul 28, 2014 12:00 am
Turkish Prime Minister and AK Party presidential candidate Recep Tayyip Erdoğan said that Israel is perpetrating a genocide in Gaza, during his political rally in the southeastern city of Diyarbakır yesterday. "The world's Muslims have been observing a sad Ramadan. As a terror state, Israel is terrorizing Gaza. The entire world is silent against it. Turkey's representatives and ministers are working to end [Israeli aggression]. Sooner or later, this [Israel-Palestine] issue will be settled." "The world is sitting idle while the bloodshed of innocent Palestinian infants and children continues at the hands of Israel," he added.

The prime minister said that Turkey will be praying for the safety of oppressed people in Palestine, Syria, Iraq, Libya and anywhere in the world during Eid al-Fitr. Over the weekend, Erdoğan stated that Islamophobia is as much a crime as anti-Semitism during his election campaign in Turkey's northwestern city of Eskişehir. "Israeli barbarism and massacres continue in Gaza, and the Western world, especially, is still supporting the aggressor."

He denounced people who took his remarks on Israeli aggression as anti-Semitic by saying, "I may be the first prime minister saying that anti-Semitism is a humanitarian crime and I also asked them [EU countries] to denounce Islamophobia as a humanitarian crime, but they were not sincere on denouncing Islamophobia." In an interview with Daily Sabah columnist Yahya Bostan, Erdoğan said that Turkey will never let Jewish people in Turkey get hurt. "Jews in Turkey are our citizens. We [the Turkish government] are responsible for their security of life and property," added. Following Israeli aggression in Gaza, dozens of protests mushroomed across Turkey to speak out against Israeli aggression, which aroused concern over the situation of Jews residing in Turkey. "I talked with our Jewish citizens' leaders on Thursday and I stated that they should adopt a firm stance and release a statement against the Israeli government. I will contact them [Jewish leaders in Turkey] again, but whether or not they release a statement, we will never let Jewish people in Turkey get hurt," added Erdoğan.

Last week, The Turkish Jewish Community (TJC) condemned the American Jewish Congress (AJCongress) for sending an open letter to Erdoğan, demanding that Erdoğan to return the courage award he received in 2004. The TJC has addressed the President of AJCongress, Jack Rosen, calling him to re-evaluate his decision. "We have just read with deep resentment your demand to the Turkish Republic's Prime Minister Erdoğan to return the award you gave him a decade ago," reads the TJC statement.
RELATED TOPICS